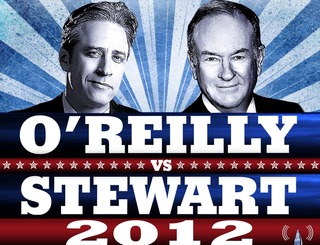 Are going head to head!  And I'm supposed to care why?  Actually I do care.  I care that we live in an age when those who made their billions in America are giving a big middle finger to America and leaving it, and wondering if there is a valid point.  And I care that as such things are happening, Americans turn to a media blowhard and an agenda driven comedic yap-dog for guidance.  One has a 'comedy' show, willing to manipulate and edit reality to discredit those who stand in the way of the greatest threat to religious liberty in 200 years.  The other is an obnoxious and ill-informed blowhard who spouts forth on subjects with less knowledge than I have about nuclear physics.  So why this is even happening, much less news, much less that big event of the season, is beyond me.   Unless it is yet one more sad sign of the times.
Posted by David Griffey at 9:41 AM

Email ThisBlogThis!Share to TwitterShare to FacebookShare to Pinterest
Labels: The Internet, Uneducating America