It's known that from little league sports to the pros, what goes on your uniform is often tightly regulated.  And that's fine.  They don't want athletes having things that might distract or collide with approved logos and other messages.  Fair enough.

Over the years, from the firing of Rush Limbaugh from ESPN, to the outcry against Tim Tebow for his anti-abortion commercial, to athletes wanting to put Bible verses or pro-America jargon on their uniforms, professional sports associations have been pretty clear: the hallowed fields and courts of the sporting world is no place for advocating political or other similar views.

Obviously this hasn't always been consistently enforced. From the famous 1968 Olympics and the legendary displays of Black Power, to Muhammad Ali's open protests against the Vietnam War, certain messages and messengers have gotten passes.  And sometimes the political implications of a sporting event, like the Miracle on Ice, have a life of their own.  Nonetheless, on the whole, professional sports has generally looked down on cavalier billboards running around on the field promoting who knows what.

So the nakedly biased and Orwellian treatment in favor of various anti-American slogans that will be allowed by the NBA is stunning.  Anything that supports either a post-American Marxist state or calls down hellfire on the unforgivable sins of America as bigoted, racist slave state will be allowed. 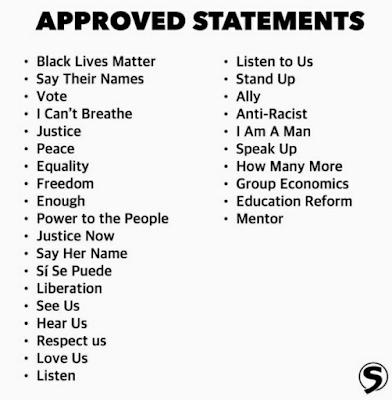 This would be the same NBA, if we remember, that threw its support behind the Communist Chinese government when it came to crushing protesters seeking freedom and liberty.

Meanwhile, as of now the other old prohibitions stand.  Signs advocating Bible verses, praise for America, support for the military or police will continue to be banned.  Those displaying such will be fined as usual.

Of course they do this since they know, when the dust has settled, 70% of conservatives have no more fight in them than 98% of conservative leaders. Already most religious leaders and intuitions have embraced the 'America as Nazi/whites as racist' narrative despite its obviously bigoted and flawed premises.  Almost every conservative outlet, industry and corporation has caved.

And in the end, they know Americans have become pretty lazy, cowardly, and worthless.  Most today couldn't scratch together a form of entertainment without pro sports or Hollywood if they had to.  And having had their faith in God seriously compromised over the generations, they just don't have much more to cling to than trying to enjoy the moment in the latest Netflix special or sports extravaganza.

At the end of the day, those conservatives screaming and shaking fists now will be glued to the big screen and watching the NBA playoffs whenever they happen.  The NBA knows this.  The Democrats know this.  Corporate America knows this.  America's Marxists and Communists know this.  And sadly, a growing number of countries around the world are learning it, too.
Posted by David Griffey at 5:32 AM

Email ThisBlogThis!Share to TwitterShare to FacebookShare to Pinterest
Labels: Anti-Americanism, Hypocrisy, The Decline and Fall of the American Dream