Confusions of a seeker sensitive pope 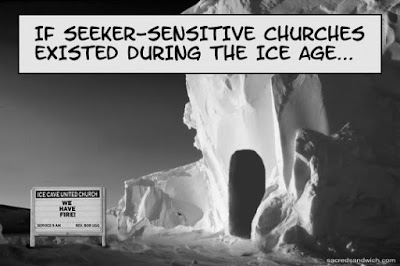 So a label is born.  Mark Shea is the king of Catholic labelers.  From Gun Cult to Christianist, he's never at a loss for inventing a term that, in the long run, seems to mean nothing more than 'people who don't think like me.'  It's a passive aggressive way of attacking people without accountability.  He can declare a group the 'yadahoohoos', and launch endless attacks and accusations at them, accusing them of anything and everything under the sun.  When you object, or insist it's incorrect, he can scurry behind the helpful shield of obfuscation and insist if the shoe fits, or if it doesn't apply then don't worry, or your objections prove you're guilty, and on and on.

Well, he's now coined a new term: Qatholics.  It would seem to be another variation on 'people (in this case Catholics) who don't think like he thinks'.  Take that for what it's worth.  We'll call that nothing new under the sun.  But he says something in this that was brought to my attention, and I thought it's worth pointing out.  He talks of the 'Qatholics' when it comes to Pope Francis.  And what is one thing this new breed of 'labeled groups' does?  He says this:

"Which brings us to the Qatholic phenomenon again. Because Qatholic, as distinct from Catholic, faith is all about exclusion and elitism. That’s why it hates this pope. That’s why it wants so desperately to turn the Church from a sacrament of salvation for all into an exclusive club for some.


As I have said repeatedly, Francis is incredibly easy to understand. The Qatholics who denounce him as “confusing” aren’t confused by him. They just don’t want to hear what he says. The entirety of Francis’ mission can be summarized in these words: “He has preached good news to the poor.”

That’s it. That’s all you need to know. He is about evangelism and, in particular, evangelism to the Least of These."

First, appealing to confusion where Pope Francis is concerned is charity on the part of many.  Catholics I know who say they are confused about Pope Francis do so because they don't want to take what he says at face value.  Not because they hate evangelism or the poor, but because they listen to the words he uses.

At face value, if you set aside confusion as an excuse, then what Pope Francis says appears quite different than what the first 2000 years of popes said.  At face value, it turns out the Church was wrong about eternity like it has been about a  growing list of other topics.  It turns out one religion is as good as another, and your relationship to Christ is irrelevant where salvation is concerned.  It appears as if the problems of the world have little to do with the Spirit, and much to do with socioeconomic issues and injustices, typically as defined by decidedly Marxist inspired liberal socialist theories and policies.  It looks a lot like any sin embraced by progressives, while technically sin, have little to do with one's sanctification or salvation.  In fact, it looks a lot like a Catholic version of those old liberal Protestant theologians who realized it was time to admit the Christian Faith was pretty much just an old myth that  modernity insists is in need of serious re-imagining.

That would be taking him at face value.  And there are those who do.  Liberal Catholics, who have jettisoned this old Body and Blood and Purgatory and Demons and Devils rubbish, seem to take Pope Francis at his word.  Most embrace modern liberal values, and see Pope Francis - taken at face value - as a great validator of those views.  Likewise those progressives and liberals outside of the Catholic Faith also take him at his word, and see a pope struggling to tear down the stupid, bigoted religion of Catholicism and rebuild it in the superior image of modernity.  They take him at face value.

So those who wave the flag of 'confusion' are being charitable.  They're saying what they hear is so egregiously opposed to anything historical Catholicism ever taught, that they're praying it's lost somewhere in the translation of the messaging.  They lack the credulity to take Pope Francis at face value and insist there is nothing new and it's all good old Catholicism the way grandma used to make.  That is why, in my experience, those Catholics appeal to confusion.

But to the bigger point. I've seen Mark use his statement about Pope Francis and evangelism's primacy several times.  Here's my concern.  As a former Evangelical, I saw the problems that arose from that same 'evangelism is all that matters' attitude.  It's greatest expression was found in the movement known as 'Seeker Sensitive Churches'.  I won't go into the history of that, and the myriad problems that arose.

Suffice it to say, that's why we have churches in Protestantism that look like concerts in a movie theater.  Seeker Sensitive Churches merely said that evangelism is all that matters, everything else is on the chopping block to make it happen.  The results speak for themselves.

That, to me, is not what Catholicism is all about.  Catholicism is both/and, not either/or.  Evangelism doesn't get to trump what it is we are evangelizing them to.  That's where Seeker Sensitive Churches went wrong.  So desperate were they to grow their churches, they ended up throwing their churches out the window to grow them.  What was left was a hollow shell of a church that often looked more like a musical festival at an Oprah Winfrey convention than anything found in the history of Christianity.

It could be that Mark is right, and the economic and political focus of Pope Francis is merely his way to reach out to the world.  Perhaps he sees the Marxism, the liberalism, the secularism, the anti-Christian bigotry, and has decided the best way to reach out is to modify or reform the Church and get rid of all those bells and whistles that our sophisticated moderns find repulsive.  It might  be that he feels the need to bend over backwards and mitigate or downplay all those parts of Catholicism which moderns reject or despise.  Maybe he feels the need to present a Catholicism that is acceptable to the powers that be who reside in the halls of influence in the modern world.

Perhaps.  If he does, then he'll learn what those strands of Evangelicalism are only now beginning to realize, that if you throw out anything the world rejects in order to reach the world, you'll end up with nothing to reach it for.

So perhaps that's it.  Pope Francis is the seeker sensitive pope, following the strategies of old Boomer era Evangelicals, whereby evangelism is all that matters, is priority one, and all other priorities are rescinded.  If so, then no confusion needed.  Just concern, since we have already seen where that strategy will lead, and it's not a net victory for the Gospel in general, and won't be for Catholicism in particular.

UPDATE NOTE: It was brought to my attention that there is no link to Mark's article.  No there isn't.   Mark and Mark's article really isn't the point as much as the point he makes.  At this point I don't go to any of Mark's sites.  There were too many cases of near heretical teachings, not to mention the sinful bilge and blasphemies that came to define too many of his comments sections.  As a result, when someone sends me something I think warrants an answer, I have no intention of linking to a site I find a near occasion of sin. So it wasn't an accident.  It was intentional.
Posted by David Griffey at 5:00 AM