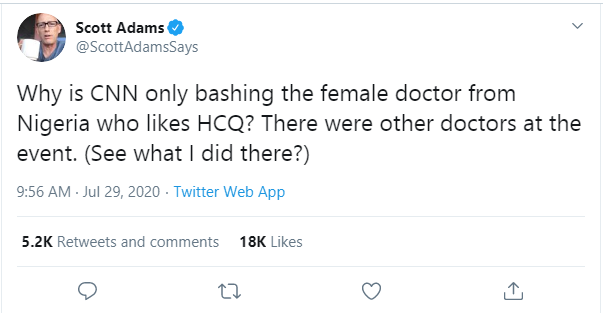 So clearly the fact that an entire cadre of doctors appears at an impromptu press conference, and the only one that most have attacked is black, I think we can draw some obvious conclusions!  Not only have they attacked the substance of what she said, they have attacked her.  They have mocked her religious beliefs, they have twisted statements and assaulted her credibility as a person beyond merely a doctor.  I mean, they have skinned her.

And she's about the only one being attacked in such manner.  And she is black.  Nigerian no less.  It's worth noting I've learned first hand that good, white liberals have little tolerance for all those black Africans who don't accept the leftist narrative of America as racist Nazi state giving black Americans no choice but to live down to the lowest of expectations.  So it might be the African part more than the black part that has drawn the fire.

Or there could be  a substantive issue at hand.  Maybe there are facts involved and she was the most prominent individual there, and the backlash is based on a disagreement over facts and details.  But who are we kidding.  If this was everything the same except conservatives and a black liberal doctor, what would those same liberals and left wing outlets be accusing conservatives of doing?

The Left cheats and has cheated for years.  It's time to call them out. Either back off the slick accusation of bigotry anytime someone disagrees with a liberal, or accept that  all those trashing this woman have exposed their obvious racial biases.  One set of rules here.  Not two separate ones.
Posted by David Griffey at 10:01 PM