A Catholic question about White Mary

Courtesy of one of our long talks with the boys.  And it's something I don't know.  It's regarding Marian Apparitions. I'll admit, that is one area I know little about.

Anyhoo, we were talking, trying to get our feet back in the old Catholic kiddy pool, and it was brought up about the statues we see that reflect various apparitions.  It doesn't take a PhD in Catholic Art to tell that Catholics, as Christians in general, have always played loose with the appearance of Jesus or Mary.  To be honest, it was never a thing.  Even Evangelicals knew that in Africa, Jesus would be African.  In Japan, Japanese.  In Mexico, Mexican.  And on and on.  For Catholics the same goes for portrayals of Mary.  It was usually considered a beautiful thing, the universal element of Christ and the Gospel.

Until about two months ago, that was no big deal. But now we're hearing Christian, and Catholic, leaders discuss just when White Jesus (and, I would imagine by extension, White Mary) is racist/Nazi, and when it isn't. 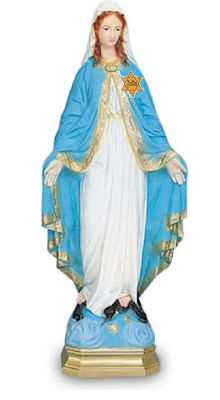 That led to the question: if it turns out a particular image of a particular apparition is deemed racist, would that somehow reflect on either the apparition, or the one claiming to have received the apparition?  What would the implications be if any and all portrayals of White Jesus/Mary are deemed racist/Nazi?  Of course this idea of 'white means Nazi' is stupidity and racism, but stupidity and racism always find support among both the weak and the willing minded.  So it's the thing younger believers may just be thinking about as they listen to their brave leaders ponder such deep topics about the Whiteness pollution of the pure Christian faith.

If we begin saying White Jesus is here or there racist, what about White Mary?  And if White Mary is linked to an apparition, then what does that mean?  Does it mean nothing?   Was it ever just artistic license that had nothing to do with the apparition in question?  Once more, I'm not saying the offense of white religious statues is a valid complaint.  It's not.  As I've said, the last time I heard such a sustained discussion over when to tear down religious art based on ethnic origins was Germany in the 1930s.  But today it's all the rage, and hipster Christians will be on board.  So these are the questions logically brought up that I have no clue about.

Therefore, I'm just curious.  Nowhere near an expert, and wouldn't even know where to look.  That I even have to entertain such a question, however, just shows how close to the railroad lines our society is getting, and how many hipster Christians will be gladly manning the gates when the time comes.
Posted by David Griffey at 6:26 AM

Email ThisBlogThis!Share to TwitterShare to FacebookShare to Pinterest
Labels: Bigotry for the Hip American, Catholic, Religion in the World, the Joy of Racism on the Left