The Feast of St. Mary Magdalene 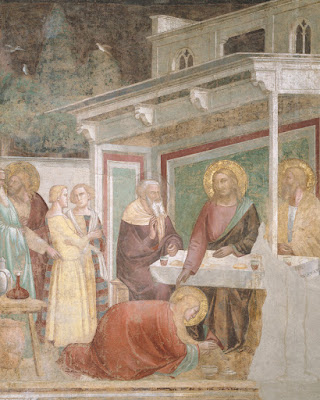 If you want the skinny, at least on the traditional approach to her, here is nice piece at my goto source for Catholicism 101.  A less stalwart and pithier account is here.

Naturally the godless would rewrite the history and make Mary Magdalene anything at all as long as it isn't what the Church said.  And some Catholics, still clinging to the idea that atheists and secularists are the really honest scholars, will change accordingly.

I've learned not to get too bent out of shape over what scholar's "know."  Generally it means what they guess, based heavily on various biases and predispositions toward elevating some evidence and lowering other evidence.  I'm content with my maxim that I accept the more traditional views that are generally agreed upon, until overwhelming evidence suggests otherwise.  And overwhelming evidence doesn't mean 'some scholar now believes.'  Hopefully the open-throated assault on the Christian faith we're seeing will finally wake believers up to reconsider just what we've changed over the years under the pretense that 'we're sure non-Christian scholars have no desire but for the real truth'.

Of course we need to make sure this or any part of the Faith doesn't just become a giant Jesus cudgel with which to charge forth and win in battle.  It is proclaiming the Almighty's tender concern for us little people, the sinners.  Since judging sinners is all the rage nowadays, we only need to get people to realize we all could have sins worthy of tearing our stamp on life down and throwing it into the furnaces.

If we do - and I can't imagine, given the carnage and suffering of our modern era, we should have a hard time believing we've sinned somewhere - then what better place to start than one of the shining examples of the Faith's love and admiration for not only the penitent sinner, but for women as well?
Posted by David Griffey at 2:00 PM