A belated shout out

To our youngest birthday boy. 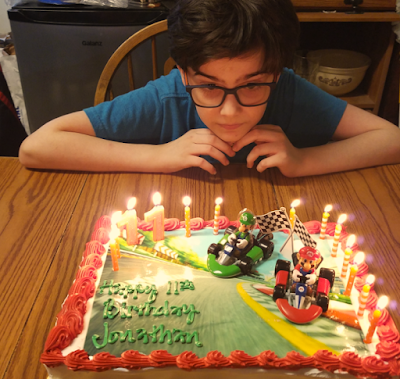 It's been a tough one this year.  But then, it's been tough for much of his life.  He was born a year after the economic collapse of 2008.  Both his Mom and I lost our positions and barely scraped by for several years.  At that point, owing to the crazy (and corruption) of the local schools, we had decided to homeschool.  Because there were no private schools in the area, that was our only recourse.  Doing so when we were struggling seemed a long shot, but somehow, all these years later with pulling resources and some big help from God just when we needed it, it's still worked.

Our three older boys did their best to include him into the fold.  Early on, our next youngest was nine and, given his general personality, was able to make his youngest brother into a new playmate.  As time has worn on, however, and the three have at least embarked on their respective life paths, it's been tougher for them to be available.  Even during this time, they're still immersed in jobs or school or both.

Because homeschool organizations have more or less dissolved, especially during the Covid-19 era, we've found ourselves mostly home, and him mostly by himself.  Even during the best of times there is usually limited interaction with other kids - the one thing we don't like about homeschooling now.  The older three, at the end of the day, had each other.  Plus they had spent years in the trenches of public school and were in many ways more 'savvy' than some of the homeschool kids we later came into contact with.

But our youngest has been, except for church and a few groups only loosely available, consigned to being with his brothers, or by himself.  That has led to an interesting combination.  First, he's actually quite good at interacting with kids when he gets the chance.  Since he has to stand up to brothers who are up to three times his size, dealing with kids his own height appears to be easy.

Second, he's mature in his thinking.  Just being in a household of six adults has led him to see things that other kids his age don't always appear to catch.  Sometimes that's a problem, however, since he gets things to a point, but lacks the life experience to always process them as an adult.  So we do have to watch what we say around him.

Finally, he's smart.  Beyond him being our goto tech guy, he also gets things, just by virtue of hanging with his brothers, playing (or watching) their games, and being in the family and learning through a classical education program.  He gets what anti-trust legislation is, can locate and identity the significance of Sevastopol, understands the influence of the Glorious Revolution on the thinking of the Founding Fathers, is learning Mandarin Chinese, and can hold his own in strategy games with the best of them (he won their first foray into Twilight Imperium after all).  And that's just a few off the top of my head.

Right now his passion is for coding and computer programming.  Those are outside of our pay grades.  We try to find ways to connect him to appropriate outlets, and hopefully more will come by as we delve into that strange and foreign land.

But I wanted to say a belated happy birthday.  As my sons say, he's grown up in a world even they can barely recognize.  In many ways, our family is a different family than the one my oldest were raised in.  In that regard, our youngest is his own animal.  And yet, he's also as much a part of the family as anyone else.  Much of the credit for that goes to the brothers, who worked overtime to make sure he always feels as though he is 1/4 of the Griffey Boys.