When I was being interviewed on a Catholic radio show once, we were talking about the state of things in the world and the Church.  This was when the Episcopal Church made news after it voted to name the New Testament as an anti-Semitic, racist document.  During the radio show the host brought that up, but said 'A certain denomination did such and such.'  I responded that it was the Episcopal Church.  After all, it was in the news.  Anyone knowing about the story knew who we were talking about.  Anyone not knowing about it has a right to know.  He was not happy, and I wasn't asked to be back on his show.

Quite frankly, I've never cared for that approach of 'You know, there's this denomination in the news that did this crazy thing.' You mean the Episcopal Church?  Or, 'You know, it was that damp, foggy island just north of France.'  You mean England?  Or, 'You know, if you don't study harder, you're going to get an F like Rick and some other people*.'

As a pastor, I didn't care for that trick.  If I felt inclined to point out a problem with something particular, I would name it.   And if I didn't feel inclined to name it, I didn't point it out.  Even if it was calling out our own denomination or one of its offices.  I think let my yes be yes and no be no means something.

Unfortunately, too often Pope Francis seems to think it means let your maybe by possibly, then you can always have wiggle room.  In an age that sees Truth and Facts the way vampires see garlic and mirrors, I can't help but think that's a bad look.  I fear it gives too many already awash in our age of duplicity a feeling of justification for doing the same thing.

Plus, what does he mean by saying he deserves attacks and insults because he's a sinner?  That's rubbish, too.  However sinful, he doesn't deserve attacks or insults.  Rebukes, yes.  Correction, of course.  A gentle kick in the butt maybe.  But not personal attacks or insults.  Technically, nobody deserves that, and if I fall into the habit of merely launching attacks and insults at people under the justification that 'the sinful son of a bitch has it coming', then I'm the problem.  Glass houses after all.

The more I listen to Pope Francis, the more I want to cringe.  He's quickly become so many things I try to raise my boys not to be.  And I hate that.  I see a lot of potential in him, and I think he could have done great things.  Perhaps he wasn't ready for the spotlight.  I don't know.  I just wish he would act the part of a mature religious leader, rather than a frat boy jockeying for laughs from all the cool kids at the house party.

*That's a humorous story from my youth.  A friend of mine named Rick was in French class with me, and he and the teacher hated each other.  One day, the teacher called out the superintendent's daughter for not paying attention.  He said, 'If you don't pay attention, you're going to get an F like Rick and some other people.'  Rick immediately protested being called out.  The teacher responded that he didn't just call him out, he mentioned others than just Rick.  At which point Rick said, "Oh sure, Rick and some other people!'  I always cherished that as a way to be overtly slick and duplicitous while leaving just enough wiggle room for implausible deniability.'  Nonetheless, that isn't the sort of story that should come to my mind when I read the latest statements by our pope.

UPDATE:  Apparently many are responding with great joy that Pope Francis has once again called out one of those other Catholic types, however thinly veiled.  Here's but one example: 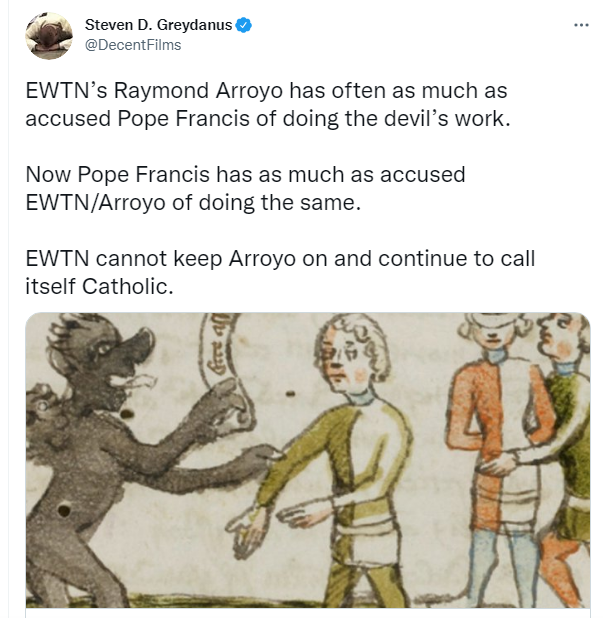 So let me get this straight.  If it was wrong for Arroyo to say the pope does the Devil's work, then wouldn't it be wrong for Pope Francis to do the same thing?  Or does Catholicism operate under the old Protestant stereotypes that being pope takes away the rules of the Lord?  Or is it because it's my side doing it, in the greatest tradition of liberal values: Of course it's wrong when non-Liberals censor things!?  Or is Deacon Greydanus, and perhaps the pope, pushing us into the post-modern world where we don't sweat consistency of principles or morals anyway, as long as we win?  I don't know.  But then, can we really be sure Pope Francis meant EWTN?  After all, he didn't name names did he?

Email ThisBlogThis!Share to TwitterShare to FacebookShare to Pinterest
Labels: The Pope