He's almost right.  There's been a surge of people running over to various New Prolife Catholic social media sites to see if anything is being talked about regarding, you know, life.  Any mention of the innocents killed by a drone strike?  Deporting immigrants from Texas?  Assault on abortion restrictions by the Left?  Anything?  Bueller?

Well, no.  I, too, decided to keep looking, just to be fair.  I said here that I couldn't resist looking at their reaction to the drone strike that killed ten civilians.  That's because I remember vividly the outrage by many NPL Catholics over such things back in the days of Bush and Obama.  Certainly they'd at least be consistent and call this out, even if they avoided blaming their guy in the White House.

Nope.  Still not one.  No mention at all really.  Lots of praise for the Biden press secretary.  The unvaccinated are baby killing scum as always.  And apparently Patrick Coffin sucks because of course he does.  I don't know much of Coffin, but he's definitely someone they don't care for.

The best, FWIW, was this little gem: 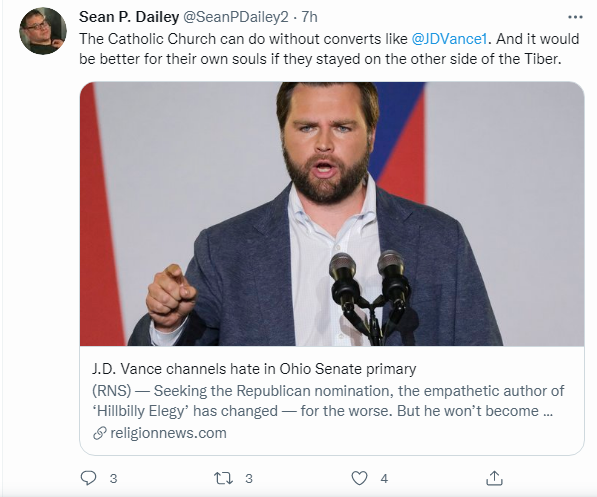 The story he links to is at this leftwing rag disguised as a religious news service.  Ah, it reminds me of those warm and fuzzy days of old when Mark Shea said it was only reactionary rad trads who were so wicked and evil (and sinful) as to say who should or shouldn't be in the Catholic faith.

Anyhoo, on the subject of Mark, it's Mark who I'm talking about in my blog title.  In vainly looking about at the various NPL Catholics speaking to the suffering of the [inconvenient] innocents, I saw an interesting piece he wrote.  Now I give Mark a lot of criticism here, and rightly so I think.  But in this case, he's almost right.  Though at the same time, he also gives away how easy it is to fall victim to the same problem he condemns.

The gist is that Raiders of the Lost Ark is a great movie, and the argument that Indiana Jones contributed nothing to the story is wrong.  That argument, so says Mark, is indicative of the Internet era's desire to tear everything apart and view everything as a puzzle to be solved or, worse,  failure to be condemned.  You know, as opposed to just watching a movie and enjoying it.

A couple things.  First, this actually began, apart from the realm of professional film critics, long before the Internet.  Blame the proliferation of VCRs back in the 1980s.  I tell my sons it's impossible to understand what going to a movie was like when you imagined that would be the last time you had a chance to see the movie.  The last chance for many years at least.

Once VCRs came by, you knew you would be able to see the movie as soon as you wanted.  And you could see it over and over again.  And you could begin seeing the mistakes, goofs, gaffes and a hundred other things you missed when you could only see a film a handful of times, if that many, in theaters.  That gave birth to the 'watch the movie for the mistakes' trend which, eventually, morphed into the 'see a movie in a combative way to find the problems and attack' approach.

But it's not just movies.  I fear the Internet did that to a host of things courtesy of generations pretty low on the accomplishment ladder.  The Internet became a vehicle for not just seeing every movie as a chance to say 'gotcha', but as a chance to see everything that way.  I do believe the 1619 Project would never make it out of the trash can before now.  Not that stupid things haven't been published over the ages.  But never to the acclaims and accolades of so many who should know better.  There's just something the Internet feeds us in terms of rejoicing over the failings and sins of - everyone else.  The same goes for the modern iconoclasm and eradication of our heritage.

The second point is that with Raiders, the criticism Mark addresses isn't the big problem now.  I saw that criticism Mark mentions decades ago.  Certainly by the mid-00s.  Along with the false claim of the Ark being a McGuffin (now that McGuffin simply means plot device), the idea that Jones was irrelevant was being argued when I first began visiting blogs and social media.

Today, that isn't the main beef, especially among younger critics.  The big beef today is that Raiders is another prime example of white racist imperialist film making - as are all films made by white Europeans and Americans'.  In this case, typical white hero steps in to save the day, while going into non-Western cultures, wrecking them, killing a bunch of swarthy types, and stealing their artifacts (just like real Western archeologists).  One review I read even pointed out that, except for a few Nazis here and there, most of those Jones personally kills are non-white.  We won't even get into John Rhys Davies racist culturally appropriating portrayal of an Egyptian Archeologist.

These  are the big criticisms of the day, and tend to follow just the kind of thinking Mark embraces.  Thinking made possible by the same Internet Mark sees as the problem.  In fact, if you read his article carefully - and in this rarest of cases, I suggest you do - you see Mark lets a little of that tendency he's embraced out of the bag.

He says the ending of the movie, with the Ark being tucked away by the United States, is symbolic of the US crushing other cultures instead of studying them.  No.  Not ever before now would I, or anyone I knew, have seen the ending that way.  People may see it that way in the last few years, following with the 1619 Project mentality.  But traditionally, it was symbolic of our governmental bureaucracies and their corruption and willingness to roll over those with legitimate issues.  That's back when liberalism was all about how bad and inept and untrustworthy our government was.

Mark's take that it shows the US crushing cultures is new.  I've not heard that until recently.  It comes with the rest of the Internet driven narrative that all whites in America and Europe were at their core racist.  Everything they did was racist. Everything they produced was racist.  And the sum contributions of the West and America is just that, the erasing and eradication of all other (beautiful) cultures.

See how easy it is?  Mark see the problem and nails it.  He misses a little of the roots of the problem, but still gets how the Internet feeds these unhealthy trends of 'I tear down, ergo I am' that the Internet seems to encourage.  But then, without realizing it, he repeats narratives and premises that never would have made any progress in sane minds before today, and still wouldn't, were it not for the very thing Mark sees as a problem.

A word of warning for all of us.  Perhaps we all need to remember such tendencies.  It's easy to see the problem when others are hitting close to home.  But without realizing it, we might be just as guilty in ways that, twenty years ago, we never would have imagined.  Splinters and planks in eye perhaps?  Or just be careful when pointing out legitimate problems that we've not bought into them our own way just the same.

Email ThisBlogThis!Share to TwitterShare to FacebookShare to Pinterest
Labels: Decline of the Christian West, Ignorance in the Internet Age