I didn't even know there was such a day, but never one to miss a chance to brag, I figured I should post a picture of the four.

I was going to perhaps get a nice portrait, or get them out in nature, or a nice pose together by the planter.  But I figured this one would be best, for it shows them as they are: 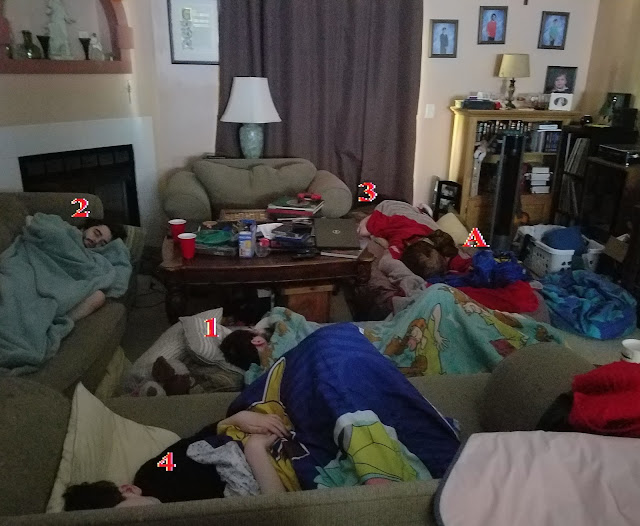 It was after my wife came home from the hospital. They all made sure they were there as much as possible.  Then they decided to camp out in the family room to make sure they were available near at hand - in a pinch.  I'd say that does better than any composed picture.

The four are 1) my oldest, still trudging through college, but getting good enough grades that so far it's free, 2) my second, college grad and working his way up the ladder with his degree in hand (and no college debt), 3) my third (under the covers, and having worked late that night) who at 21 is already a manager eyeing the next level up, and 4) my youngest, in seventh grade and doing a nice job inserting himself in the brotherhood as one of the four.  By the way, A) is the pooch. always present and usually stuck to the hip of my third son.

That's them in a nutshell.  Don't know if they'd care to find out I posted a picture of them sleeping.  But knowing why they were there together sleeping in the family room and what it meant to my wife, I couldn't think of a picture from the recent files that tells their story better.

Email ThisBlogThis!Share to TwitterShare to FacebookShare to Pinterest
Labels: Important things, the Boys, The Family