It takes a post-Christian nation to erase Robert E. Lee

As demonstrated by Christianity Today and Russell Moore.  Read it here.

Ah, that's my old classmate.  Rejoicing that the statue of that reprehensible sinner to be defined by his reprehensible and unforgivable sins of not being as righteous as, well, the good folks at Christianity Todqy and Russell Moore.  FWIW, the good deacon and film critic Steven Greydanus apparently loves him some Russell Moore, and sees ol'Russ as the primary voice of modern Evangelical Christianity, given how frequently he bathes in the pool of Moore when it comes to tapping into the mind of the postmodern Evangelical: 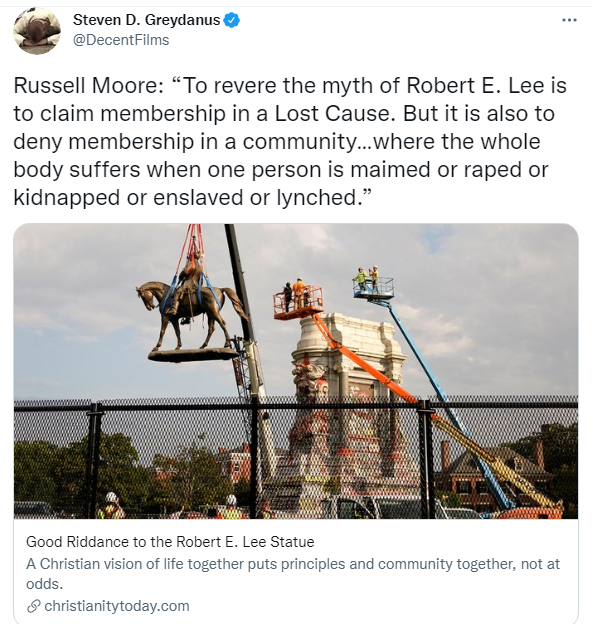 The thing that shocks so many, myself included, is the speed which those who once decried the horrors and sin of the modern Left - debauchery, blasphemy, lies, hatred, arrogance, slaughter of the innocent, and complete rejection of the Gospel - are now on that very side.

It isn't even just cozying up to the race hate and prejudice, the tyranny and the oppression, the duplicity and the subterfuge.  They're also tossing old time Christian anachronisms like humility, reconciliation, responsibility, forgiveness, and mercy.  They completely embrace the multicultural notion that when Robert E. Lee was beating his slaves and laughing at the idea of freeing them, the rest of the world must have lived in a utopian paradise of peace, love and John Lennon songs.  Did the world have Jesus?  Who gives a flip!

Many of these things you just assumed would still be held by those now in various levels of bed with the Left.  After all, even the most hardline liberal Protestant denominations were still honor bound to extend the notion of forgiveness and non-judgmentalism to such reprobates as Lee, Lincoln and Jefferson.  After all, refusing to judge was the gateway toward gay rights, trans rights, abortion rights and any other leftwing cause.  So what's good for the goose, right?  We can point out the sins of those old timers, but we certainly can't judge.

Well not now.  We don't need to talk of not judging or being compassionate since most today, and the bulk of youngsters today, think gay sex and transgender boys are as natural as a dog biting a man.  To them, the idea that sex is about babies or equality isn't a white supremacist ploy is the man biting the dog.

So no need to prattle on about not judging or forgiving and being merciful and compassionate.  The Left can now demand we judge without mercy or humility; we embrace pride in our superiority and hate those reprobate sinners who came before us who had the temerity of not living up to our infallible standards  We destroy them and erase them as we should, because it's likely forgiveness and mercy are just tricks of the European colonialist anyway, just like all those other Western values.

And those Christians and Conservatives trying desperately to keep one foot in that old time religion and another two in the Leftist party can only do one thing - and that's jettison those stupid notions of forgiveness, humility, reconciliation or understanding for those who came before.  Because that's what the Leftist State now demands.  And they obey.  In so doing, they keep their corner offices in Manhattan and continue to go to the best parties in Hollywood and on Ivy League campuses.  Just as paid representatives of God's clergy have done for eons.