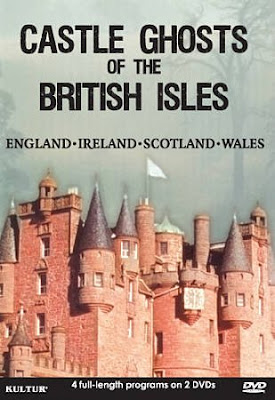 Not just any castle ghosts mind you, but Castle Ghosts of the British Isles.  Ages and ages ago when this ancient planet was not so ancient, and The Learning Channel and A&E were about things like learning and the arts, there was a spate of documentaries well worth the watch.  Heck, it was so long ago that the History Channel produced shows about history!

Anyhoo, there were several series produced back then that we received as gifts in the old VHS format.  One of them was a show called Castle Ghosts of Ireland, and another Castle Ghosts of Scotland.  Narrated by the late Robert Hardy, they're presented as 'documentaries' looking at a collection of famous castles in Ireland and Scotland that are reputed to be haunted.

Eventually we found a DVD collection that had all four of the specials. They were released from 1995 to 1997.  There was one for each: Wales, England, Scotland and Ireland.  England was the first produced, and shows a somewhat sparse budget, if not some imaginative production values.

The Ireland and Scotland episodes both came out in 1996.  We received them as a set, and they were the first we got for a present.  Truth be told, they're the best.  The England special must have been a success, because both of these show a marked uptick in production quality.

Also, aside from the Tower of London, Scotland and Ireland have some of the most famous haunts and stories that you don't need a Castle Ghosts tour to learn about.  The famous Piper of Duntrune, Glamis Castle and its boatload of specters, and Leap (pronounced 'Lep') Castle were known long before we popped those video cassettes into the player. 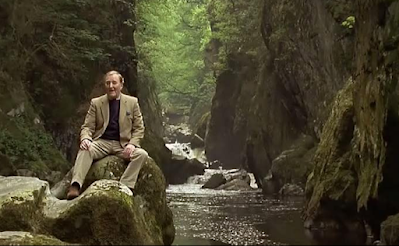 The special on Wales is the weakest, having no especially famous stories, no Shakespeare reference points and, as my sons noticed, no 'anchor' castle to wrap up with.  Ireland has Leap Castle, Scotland has famous Glamis (Glamis hath murdered sleep...), and of course England the Tower of London  But Wales has no famous haunted castle known outside of the realm of enthusiasts.  Plus, the stories themselves seem obscure and a bit stretched, compared to the ones in the other specials.

Nonetheless, the whole of the series continues to be an absolute delight, and an annual tradition.  We began showing them to the boys when they were little, usually some time in September before the full brunt of Autumn sets in.  Some of them can be moody and evocative and, to be honest, a bit unsettling.  In their younger days, our sons all had their moments of sleeping under the covers after watching these.

Robert Hardy is a joy, playing it straight and acting as objective about his belief in ghosts as if he was teaching Algebra.  I'm almost willing to accept that he really did believe there was the ghost of a monk in his house that stoked his fireplace.  Each episode is a chance to unpack a little regional history and, in the case of stories like the Grey Lady of Glamis or Norman Leslie of Castle Leslie or the Tower of London, a chance to reflect on some of the more violent periods in British history.

If you can, get this set.  I encourage anyone to do anything, no matter how fanciful, that points to that Invisible part of God's Creation that gets so little play time in our STEM era. Besides, they're fun, well produced, and a great way to tweak that sense of the fleeting image in the corner of your eye just as you turn down a hallway.