The problem with feminism today

Is that I don't think there is any egregious evil feminists could advocate that the Left and its supporters would ever call out.

So a firebrand feminist journalist is upset that authorities are looking for a mother who allegedly ditched her newborn in a shallow grave.  Ms. Grimes' reaction: 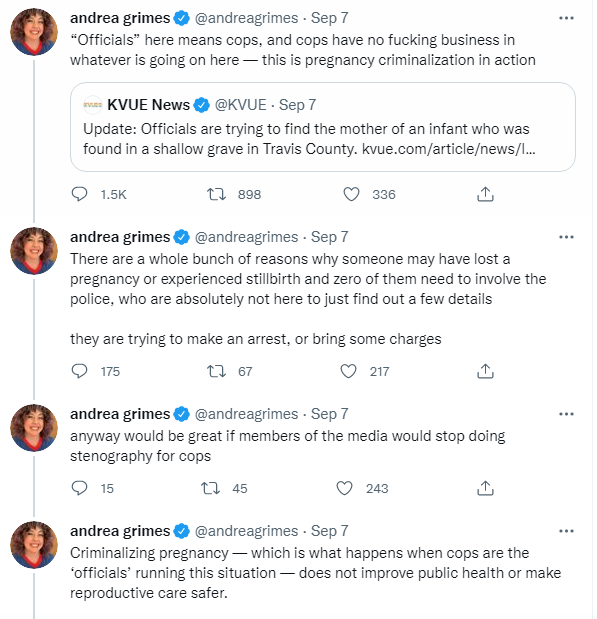 You can almost hear the addendum that if women aren't allowed to do with their children as they please, then you men ain't gettin' any.  A threat which has done wonders for men who long ago turned the reins of running the local church over to women so men could golf and watch the game on Sundays.

But just consider what she's saying.  How dare cops look for a mother who might have killed her kid.  This is women stuff.  Women rule.  Women can damn well do what they please with kids and shut up.

I swear if feminists said they wanted to start gassing Jews in gas chambers, the Left would remain silent.  This is what happens, and it's yet one more blotch on the deplorable track record of the brainless, ball-less, gutless, spineless 20th Century male that this has been allowed. Now you have good New Prolife Catholics fighting to destroy anyone who would try to curtail this most sacred right of women in the modern era.

I fear we passed that point of no return when men allowed women to say that whether a baby is a miracle or a bunch of sludge to be eradicated is up to the woman.  The only role for the man, after the "obvious", is to stand in the corner, shut up, and find out if there is something for him to be financially responsible for or not.  When men allowed that, it was all over.

With each passing day, I become more and more convinced that feminism was the most effective weapon of Satan fired at the floundering Christian West.  It was when we officially sanctioned the right of women to put themselves first to the exclusion of all other considerations, including the wellbeing of children, and were happy to allow kids to be sacrificed on the altars of the male libido.

Exactly why so many celibate priests have fallen for this is open to speculation.  But the problem, and the likely causes, remain shameful and one more mark against this era in the opened books.

Email ThisBlogThis!Share to TwitterShare to FacebookShare to Pinterest
Labels: Abortion, Culture of Death, deals with the Devil, Feminism, The REAL American Holocaust