Gloria Purvis and Dawn Eden bravely discuss the sins of others

Dawn Eden has learned that - horrors! - one of her Catholic heroes held and shared! ... I can't bring myself to say it .... anti-Semitic views! (more on this later).

Sigh.  I'm beginning to think condemning the sins of our forebears has become the eighth sacrament of the Church.  A generation that defines its righteousness by round the clock dredging up the sinful thoughts and attitudes of past sinners is in a boat load of trouble.  It's an appealing narcotic to be sure, to know that it's the sins of others long gone that you're accountable for.  Not that it's without biblical precedent.  But it isn't hard to see that what is going on now is hell and gone from a biblical approach to national repentance.

After all, a generation whose stellar accomplishment is watching the civilization it inherited crumble under its watch should clean its own house first.  A generation that has to discuss arming teachers because of  our children mass killing each other in our schools should not be throwing rocks at old time glass houses.  A generation that can boast aborted pregnancies in the hundreds of millions, a debauched and hedonistic culture while tens of millions have died of AIDS and drugs, unprecedented levels of depression, drug addiction and even suicide among children as young as ten years old, out to be slow on the judgment.  And a generation of believers watching unprecedented numbers of believers abandon the Faith for good, or remain and not give a damn about those tired old fairy tales that nobody believes anyway, is not one that should crow too loudly about the sins of yesterday's prophets.

Yet our continual response to the dumpster fire we've made our generation into is to dig through the records of the past to find out how utterly sinful those who came before us really were.  Sins, by the way, that were often sins of thought or attitude that were all too common then - and just as common today when applied to new demographic groups. May God not judge us as we so brazenly judge those who have come before. 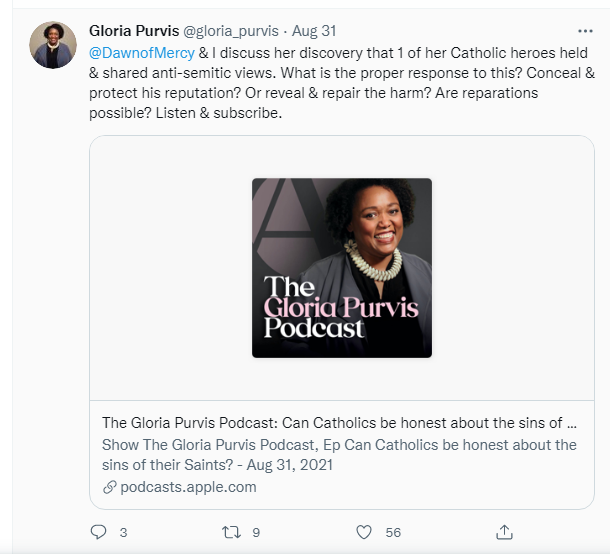 As a bonus, the always Jesuit America magazine throws its two rubles in with Ms. Purvis and asks just how we  can approach the clear and obvious sins of all those saints we kick around.  As if people didn't realize that the sinfulness of saints is part of what makes the saints so darn inspiring.  If sinners like those can be saints, there's hope for me!  Or do they mean the unforgivable sins of the saints, such as racist thinking, as defined by the Leftist State today?

For my part, I grow weary of the obsession with sins like racism and sexism, accusations easily thrown out but also easily denied or covered up.  How do we know the whites who scream racism the loudest aren't the racists?  Especially when racism today is more or less defined as failure to adhere to certain politically charged dogmas, based on one's skin color of course, rather than actions and how one lives one's life?  Something you'd think a proud Jewish convert to Catholicism would be more careful about. But then, you'd think an African American Catholic would be careful, too.

Also, a bonus observation.  Ever notice that liberalism never admits failure?  When we embrace the latest, and the latest ends in disaster, it appeals to group guilt.  So instead of standing beside the Texas attempt to curtail the slaughter of modern abortion, the always Jesuit America magazine instead appeals to the horrors of our patriarchal (read: the men made us do it) guilt and problems and fault and all that group identity guilt that's all the rage in 21st Century Leftwing discourse.  After all, it couldn't have been yesterday's liberals with their promise of consequence free debauchery that is the main problem.

Again, it's increasingly clear that the focus on past sins is the only antidote for a modern generation with so little to show for its time on Earth.

Email ThisBlogThis!Share to TwitterShare to FacebookShare to Pinterest
Labels: Catholic Church and the Left, Leftist Inquisition, The Worst Generation