Friday Frivolity: A season of feasts and plenty 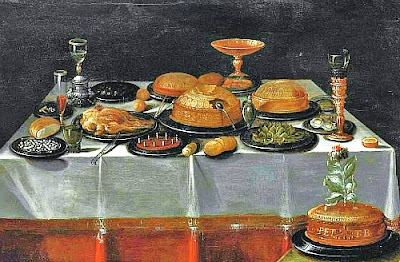 Autumn.  I've written often about my favoritist of all seasons ever on this blog.   I speak of memories and nostalgia, traditions with the family and old school memories.  I've written about the foliage and even the decay and thrown out some theological musings in the meantime.  At later times I've linked the season with the witching season of Halloween and thoughts along those lines.

But I've never stopped to muse about what Autumn really meant for so many ages to people who saw harvest as more than a time to buy football tickets and run out for the latest pumpkin spice flavored pizza (double yuck, yuck).  For our ancestors, Autumn was the season of life itself.

It was the season of plenty, of harvest, of feasting.  It was the season that set the stage for winter and whether abundance or starvation or death would be the name of the game.  In short it was less about costume parties and yard decorations as much as it was keyed to the fruit of the year's labors and the bountiful blessings the Earth yields for those who work her.  When they rejoiced and celebrated, they did so for life itself.

Here are a few passages from one of Washington Irving's most famous literary creations, The Legend of Sleepy Hollow.  It describes the lands haunted by the Horseman as the ill fated Ichabod Crane would see them.  Being of modest means, Ichabod looked at such seasonal bounty the way a Manhattan stockbroker might look at a Lamborghini today:

"It was, as I have said, a fine autumnal day; the sky was clear and serene, and nature wore that rich and golden livery which we always associate with the idea of abundance. The forests had put on their sober brown and yellow, while some trees of the tenderer kind had been nipped by the frosts into brilliant dyes of orange, purple, and scarlet. Streaming files of wild ducks began to make their appearance high in the air; the bark of the squirrel might be heard from the groves of beech and hickory-nuts, and the pensive whistle of the quail at intervals from the neighboring stubble field...

On all sides he beheld vast store of apples; some hanging in oppressive opulence on the trees; some gathered into baskets and barrels for the market; others heaped up in rich piles for the cider-press. Farther on he beheld great fields of Indian corn, with its golden ears peeping from their leafy coverts, and holding out the promise of cakes and hasty-pudding; and the yellow pumpkins lying beneath them, turning up their fair round bellies to the sun, and giving ample prospects of the most luxurious of pies; and anon he passed the fragrant buckwheat fields breathing the odor of the beehive...

Such heaped up platters of cakes of various and almost indescribable kinds, known only to experienced Dutch housewives! There was the doughty doughnut, the tender oly koek, and the crisp and crumbling cruller; sweet cakes and short cakes, ginger cakes and honey cakes, and the whole family of cakes. And then there were apple pies, and peach pies, and pumpkin pies; besides slices of ham and smoked beef; and moreover delectable dishes of preserved plums, and peaches, and pears, and quinces; not to mention broiled shad and roasted chickens; together with bowls of milk and cream, all mingled higgledy-piggledy, pretty much as I have enumerated them, with the motherly teapot sending up its clouds of vapor from the midst—Heaven bless the mark! I want breath and time to discuss this banquet as it deserves, and am too eager to get on with my story."

Ah, what a portrayal of autumnal abundance. Your stomach almost growls at the thought.  Even in our age of consumer plenty, online shopping and digital supermarkets, that sort of picture of pre-modern culinary anticipation is enough to get the old gastro pistons popping.

Why not?  You read those passages above, or you read some of the poems praising this most colorful of all seasons, and you can't help but catch the celebratory feel.  It is almost bursting at the seams with joy and thankfulness for everything laid before the viewer.  It may be a season in which life turns to decay, but it was ever the season that pointed to life and what was needed to sustain it.

That's what Autumn should really be about.  Perhaps it's because industrialization and technology have effectively divorced so much of humanity from our more earthen roots, we must supplement with traditions of tailgates and horror movie fests.  Nonetheless, it might be those roots long gone that still tug at us, and why so many people seem to get excited today, not at the thought of spring blossoms or even silver bells, but of colorful leaves and pumpkin patches and orchards.

After all, in the day, people knew exactly why it was they were thrilled with the coming harvest season. And it wasn't the abundance of decorations.  It was the fruit of their labors, the abundance that the land provided.  To them, a cornucopia was more than a decoration.  It was a symbol of another year of life.  I can't help but imagine that was a more pure want than the things we drool over today.  Since most of us don't fear starving between now and next spring, much less next week.

As a bonus, and because I'm a swell guy, here's a link to an online cooking site that walks you through your own Ichabod era harvest feast, early American style.  Try that some time.  We've done Hobbit feasts and Scrooge (or at least Cratchit/Fezziwig), and Henry VIII Tudor feasts.  Building a dinner around a particular book or historical era can be fun and, given how the other half feasted in the day, quite filling.