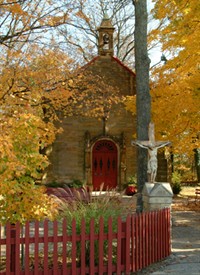 It's nice to get back to basics.  After the Noon Mass today, a group seeking to become a religious order stopped by the parish.  There was good eating (almost up to Baptist potluck standards - and that's saying something), and a brief presentation.  Afterward, the sisters broke up and mingled with those who came by from our parish - not enough IMHO.  And a shame.  They were quite interesting.  Our 13 year old, Mr. Personality, monopolized one of our priests, our deacon, and one of the sisters.  Another sat by me and picked our testimonial, reminding me that our story is one that should be heard.  It's been a while since anyone really said much.  Most who know us have heard the story and know the story, but it's old news.  For divers and sundry reasons, I've not gotten out in recent years to tell it much.

But interested they were.  So much so that we were offered many prayer cards, opportunities to speak to others, invitations to their retreat center, and a general open armed invitation to keep fighting the good fight.  This stands in such stark contrast to much of what life has been in recent years.  Our parish has had, well, some issues.  I won't even get into it.  Let's just say that five years ago, you better get to Mass early or your family is dispersed across the sanctuary.  Forget not getting there early for Holy Days.  Today?  You could play tennis in all but one Mass and not hit anyone.  Plenty of seating and parking!  So there hasn't been a whole lot of options, and given the craziness of our lives, I've not been available to do much.  Which is fine, since with a couple exceptions, we've not really been invited to do much save by a handful of parishioners who seem to remember our stories.

Remaining growth was confined to reading, following the always awesome Fr. Barron and some others, or - ahem - following various Catholic blogs, some of which have changed radically over the years.  Otherwise, going to other blogs have had their place, some Protestant blogs and other such blogs still reminding me that to be a good Catholic and good American does not have to be antithetical.  Going to atheists blogs, however, is an exercise in self abuse.  I'm sure there are some out there that are thoughtful, open, realistic about atheist thought with its strengths and weaknesses, and a nice visit.  I've been to some over the years.

But most exemplify the worst of the emergence secular left.  A hodgepodge lazy ideology of debauchery, hatred, bigotry, ignorance, and a yearning for tyranny. Calls for Orwellian censorship, loathing of those who don't conform, and a growing impatience for the freedom to not be a post-religious leftest.  And the payoff?  A promise that religion is at best a bunch of made up fairy tales and legends, a worst a vile set of lies that are the cause of all human suffering that needs to be eradicated from humanity.  And once done, we can finally lower ourselves to the lowest animal denominator, a life of endless debauch, drugs, sex and the right to abort and euthanize the unwanted who stand in the way of our libidos.

And naturally lying, disingenuous BS, outrage and name calling are how such things are defended.  So pointing out that Orthodox Church leaders trying to ban atheist parades, while wrong, is understandable given the brutal oppression of the Church under the explicitly atheist USSR.  And the result?  BS, lying, name calling, vulgarities, and copious levels of denial that it ever happened, or that atheists ever say religious people are bad (despite it being the purpose of the blog in question).  And you know what? Life is too short.  Would a Jew go to a Nazi site and argue?  Would a Black go to a KKK site and argue?   I don't think so.  Bigotry and hate have always been around, and now is no exception.  That it is encouraged and accepted by the rich and powerful of our society is no different than ever.

That is not where one finds God.  On occasion, one must step up and fight the evil.  Or if modern trends are to be believed, one must succumb like a lamb to the evil.  But usually, it's in that still small voice of God that we find Him and His purpose.  Not in the battles, the arguments, the idiocy and bigotry that is now, always has been and always will be.  It's not in the earthquakes of the blogs or the firestorms of cable yell-fests.  It's in seeking God.

And after meeting those sisters, seeing them give it all up in an age that wouldn't risk a wet hairdo for a cause other than getting high or laid or the latest iPad app, I have to say I was inspired to remember what brought me into the Church in the first place.  And that was finding the Truth.  Even if the Church itself will waver and fail, as it has in the past and no doubt will in the future, the Truth remains.  That's why I became Catholic.  That's why bank accounts and savings accounts that once existed are empty.  Why cars and vans are rickety and in poor shape. That's why college funds are depleted and a house stands dilapidated.  It's because when one finally finds that pearl of great value, one sells everything else to get that pearl. 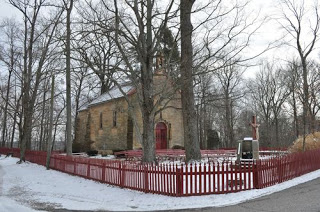 So as I rethink things and take an assessment of what has unfolded this day, the reception of our story and the willingness of a bunch of sisters to extend a gracious hand, when set in juxtaposition to the hatred and bigotry of some atheist blogs, and the self righteousness and fundamentalist zealotry of some Catholic blogs, I will take the former.  I'll think on that pilgrimage to St. Meinrad all those years ago that first got me thinking about Catholicism.  And from there, who knows where we'll go.  Probably to the retreat center we've been invited to, and from there, who knows?  So while I'll continue to comment on today's spiral into yet another historical pitfall, and notice the Church's hits and misses, I'll tend to lay off most blogs that don't inspire or encourage growth spiritually or intellectually.  Any blog that encourages me to call others Raca for not being good Catholics like me is definitely off the list.  And any blog that embraces the Father of Lies to convince me my only hope for peace in the future is to renounce the God of love in order to embrace the age of the valley of Hinnom is not even worth mentioning. Where this will lead, I don't know.  But once again, it's time to go exploring!
Posted by David Griffey at 4:31 PM