A jump start on the festive season 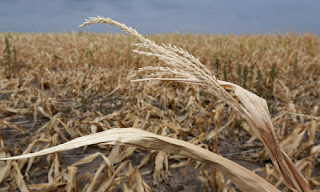 This year's garden will not be good.  A host of issues beset us.  First, for some reason, our neighbors can grow corn by squirrels leave them alone.  Instead they assault our corn year after year.  No matter what we come up with, somehow the squirrels get through.  If it's not the squirrels, it's something else.  One year Japanese Beetles when we went away for a week.  One year someone in the neighborhood picked the ears. And one year I'll swear deer got into it.  Why us and not the neighbors, I'll never know.

But this year was bad, because we realized that the leaves we were using to mulch into the garden were, in fact, poisonous to the plants we were growing.  The suggestion was given to use the leaves, not knowing the consequences!  So on top of everything else!!  Oh well.  Live and learn.  If gardening does anything, it teaches you how helpless we really are in the face of nature, and why so few people that live among the growing things of the world and make their living from the seasons are hardcore materialists.

Still, harvests are what they are, and we've gotten some good things (big bean harvest), and Roma tomatoes are, for some reason, growing like gangbusters.  Some peppers, but not enough.  And not enough cucumbers to pickle this year.  Even our squash did badly.  Even our radishes!  It will be more miss than hit, alas.  There's always next year!  With our oldest son's decision to stay home for a year, his leaving school doesn't pack the same punch.  I told him he must leave someday, but a year to save up for school is not bad thinking in my opinion.  Not with college loans being the trap so many fail to account for nowadays.  So he'll be around to help then.

But with the garden struggling, and everything else, somehow we've begun to jump ahead on the upcoming festivities.  My thirteen year old hurt his ankle and is more or less out of football this year, missing all practices going into the season, and concluding that rest it and hold till next year.  Perhaps to compensate, we've turned to the DVD and suddenly found ourselves watching Hammer Films' Hound of the Baskervilles a couple weeks ago.   And last night, we caught the first few minutes of Hammer's The Curse of the Werewolf.  An different spin, dispensing with so much of the Hollywood yarns and getting back to old world European myths regarding those rascally shapeshifters.  Staring Oliver Reed, who my boys know for his impressive take as the heartless Bill Sykes in the musical Oliver!, it is an interesting production as only Hammer Films could muster.

And it's only August! What's wrong with us?  Oh well, don't begrudge it.  Nuns and werewolves, if that's what it takes to help my family find our way and get through the gauntlet, I'll take it.  Even if it's in the 80s in the dog days of August.
Posted by David Griffey at 5:09 PM