There is a trend in some corners of the Catholic Blogosphere to more or less embrace almost every aspect of the hedonist, post-Christian, pagan inspired debauchery, individualism and flip-the-bird disregard for anything traditional as long as I think it's so cool and it makes me laugh.  Part of this, I suspect, is due to the disproportionately large numbers of Blogger Catholics who proudly wear the mantle of 'geek outsider non-conformist.'  As I said here, that sort of self identification may well inform the way one does adulthood just the same.

Nonetheless, there is, in some places, a clear sympathy for such progressive, post-Christian advocates of gay sex, gay marriage, abortion rights, embryonic stem cell research, atheism, Leftist anti-Christianism, psuedo-Socialism, and just about anything else that is abhorrent to traditional Christian values, or traditional values in general.  As I said here.

It wouldn't be so bad if some could find the same humor among more conservative entertainers, but usually in these circles, despite claims of being conservative Catholics, conservatives today are dismissed altogether.  Rush Limbaugh?  Forget it.  Mike Huckabee?  Ha!  We won't even get into what few Conservative entertainers there are.  Even if they do something like oppose abortion, often it is dismissed because they are only 'anti-abortion', not pro-life (following the Church's changing positions on just war and capital punishment), and probably don't care about murdered babies anyway.  Nope, it's the cool hipster types because, well, they're so funny, so witty, so darn funny.  That's what matters.  And funny is important, just like this picture shows: 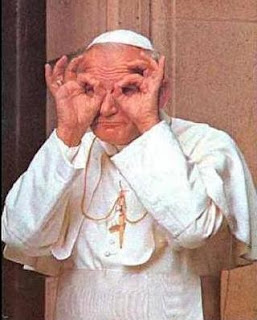 You see?  Pope John Paul II demonstrates his awesomeness and why he's so blasted cool by making goggle eyes at the camera.  Yes, I think it's cool.  I think it's funny and fun.  I love the picture.  I think some of these hipster cool progressives can be funny.  I also think some more conservative ones can be funny, or at least kind and witty.  But I never forget what they advocate, and I'll never dismiss it just because it happens to tickle my funny bone, or make me laugh, or because, let's face it, I personally enjoy being entertained by them so am happy to dismiss advocacy of hellish morality because I blow beer out my nose laughing.  And I certainly won't smack down one and celebrate another just because one tickles my funny bone.  For it takes more than good humor to overcome Hell.  As another picture I've never forgotten, which brings to mind the above picture of Blessed John Paul II, always reinforces:

Yep, that's old Uncle Joe Stalin.  You know, one of history's most brutal mass murderers.  And lest you think that's some fluke picture he did just to soften his image, here's another one of him being silly with his daughter: 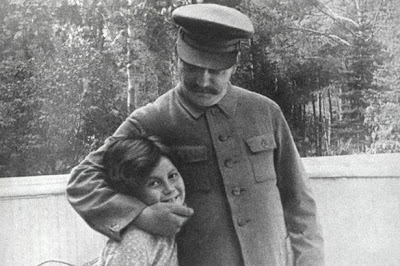 You see?  A real laugh-a-minute family man. Humor is good.  Being fun and frivolous is OK.   But it doesn't taketh away the sins of the world.  I'm sorry, but if you are going to spew righteous indignation at conservative and traditionalist entertainers, hosts and others because of advocating our military actions in the Middle East, Iran, enhanced interrogation, Capitalism or whatever, then you can't - and I mean Can Not - turn around and dismiss entertainers and others on the left who actively promote those sins that cry out to God for Vengeance. because culture says they are the hipster cool types worthy of love and adoration.  Not even in the name of 'being harder on my own team.'  One must condemn, and treat equally, those from both sides. To do otherwise is to be nothing other making religion around myself based on my whims and fancies.  Just pointing that I'm following this fellow cuz he's awesome, even though he flings his fingers at the morals of God, is not exactly building a credible case for Catholic consistency.
Posted by David Griffey at 7:14 PM

Email ThisBlogThis!Share to TwitterShare to FacebookShare to Pinterest
Labels: The Catholic Blogosphere