The most immoral television show of all time 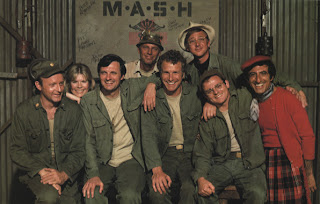 My boys sometimes like watching older shows.  I was a fan of the show Frasier, and they've watched that show, even asking for DVDs for Christmas and their birthdays.  They love The Andy Griffith Show.  And over the last year, they picked up on the classic series MASH.  I didn't get them started there, though I was a fan growing up.  Over the years, I look back and almost cringe at some of the heavy handed moralizing that went on in 70s television.  Those shows made Ozzie and Harriet look subtle and balanced by comparison.  But upon watching MASH through the eyes of brand new viewers, I was shown something I hadn't noticed before.

MASH is perhaps one of the most horrifyingly immoral shows ever produced.  My boys caught it, never having watched it and having no presuppositions going into it.  Hawkeye is the epitome of 70s  liberalism, and he and his colleagues B.J., Col. Potter and Col. Blake, Trapper John all represent the best that 70s liberalism had to offer.  And how did they do this?

Well, they were tolerant, witty, charming, caring, open to women's rights, gay rights, civil rights and anti-war. They were everything that liberalism promised and more.  That was why Alan Alda was the poster child for liberalism well into the 1980s.

And yet.  Through the eyes with which my boys first watched the series this year, those same icons of virtue and moral superiority encompassed almost everything that decent humanity should shun: they lied, cheated, stole, slept around, had affairs (though that did pass with the rise of feminist sensitivities in later episodes).  They bullied, brutalizing and terrorizing anyone who ran afoul of their sensitivities.  They used their knowledge of medicine to scare, intimidate and coerce.  They prescribed faulty treatments, frightened with fake diagnoses, and even performed unnecessary surgeries to eliminate antagonists (this happened twice, and in fairness, the second time did include discussion about whether it was right to do or not).

Not to mention that, as Mark Shea pointed out a while ago, Communism - history's most murderous ideology - was often given a wink, a pass, and even tacit support.  While the United States, its history, its government, its military and its culture were frequently mocked, laughed at scorned and dismissed.

My boys pointed out that they should have been tried and court-martialed and convicted for treason, aiding the enemy, and endangering our own troops.  Morally they should have been condemned on just about every level, with the possible exception of the character Fr. Mulcahy. And their behavior of doctors?  If they didn't end up in jail for their medical crimes, they certainly should have lost their medical licenses and been banished from practicing medicine for life.

Really, watch it with someone who has never seen the show before, and you might be surprised. In an age where bullies are the Nazis of society, wonder why Hawkeye and Trapper, or B.J. for that matter, are anything less than ostracized.  Most school bullies pale in comparison to how they treated Frank Burns, or anyone who got in their way for that matter.  It gives you something to ponder now, as that which was once called liberalism embraces the Dan Savages and Bill Maher's of the world to be its voice.  Should we ever have been surprised?  Look at a show that was celebrated by those who promised our enlightened age a kinder, gentler and more moral society.
Posted by David Griffey at 10:40 AM