When movie reviews are wrong 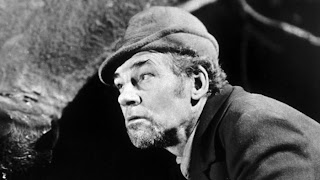 For some reason, in the age of Information highways, I see more and more things that are factually wrong.  So the other day, my boys asked to watch The Devil and Daniel Webster.  We love that movie, packed with traditional celebrations of America and its finer qualities, while not being blind to its darker sides, as most Americans appeared to realize.  I discuss that here in an early blog post.


Anyway, we watched it as a family.  Walter Huston alone makes it more than worth while, and there are far more wonderful elements than Old Scratch.  The film making is quality, and director and producer William Dieterle goes above and beyond to make it at times eerie, at times comical, and always thought provoking.  Only in this last viewing did my boys point out that when Jabez first sells his soul, his first action is to lie about where he found the gold.  Out of the gate, his first big accomplishment is being dishonest. Some good theology there.

Anyway, as is our wont, we decided to look up more information about the movie.  On Rotten Tomatoes, we noticed a particularly high rating.  It typically gets high ratings, and for more than Huston's Oscar nominated performance.  But then I noticed this:

Scratch offers Stone seven years of wealth and good fortune in exchange for his soul; Stone, assuming it's some sort of joke, agrees. Soon Stone's fields are plentiful and money is rolling in, but his financial success comes with a price

Unless I'm missing something after repeated viewings, Jabez doesn't see it as a joke.  He is convinced by Old Scratch that souls don't exist.  You can't seem them, touch them, feel them.  And so in desperation and willing to believe anything to get himself out of his problems, he signs in blood on the dotted line.  I wondered about that review.  Did whoever write it miss this fact?  Was there some mental block that couldn't accept that Jabez has accepted the modern materialist explanation for things?  It was never presented as a joke.  Jabez protests that he has been tricked.  He sees later that the Devil had given him money and all it could buy, but never promised happiness.  But when he picked up pen to sign, he did it to get out of trouble, having already seen the Hetian gold.  I just thought about that when I read the review.  Is it wrong on purpose, or did the viewer simply wish to avoid the obvious?  Just kicking around a thought or two.
Posted by David Griffey at 12:14 PM

Email ThisBlogThis!Share to TwitterShare to FacebookShare to Pinterest
Labels: Ignorance in the Internet Age