Does television have local shows anymore?  When I was a kid, I didn't watch Romper Room or Mr. Roger's Neighborhood or Sesame Street (though I did like Burt and Ernie before they came out of the closet, and Oscar the grouch).  I watched cartoons, esp. Bugs Bunny and Tom and Jerry before the censorship.  I watched Hogan's Heroes, Combat, and other WWII era TV shows.  On Saturday mornings, I took in the entire gamut of Weekend kiddie fare, starting with the shows from Sid and Marty Krofft (an acquired taste, sobriety was a hindrance to enjoying those productions), Scooby-Doo, a weird assortment of throw away cartoons, and finally the climax of the Saturday morning ritual: Pillsbury cinnamon rolls with the Bugs Bunny/Road Runner Show.

Ah, those were the days.  Most of the viewing came from Saturday morning, though some were shown at early prime time through the week.  There was a half hour Bugs Bunny show at 7:00 PM for the longest time, and I believe Combat and Hogan's were reruns at around 8:00 - 9:00 PM.  Through the week, I didn't watch much TV.  Too busy playing.  In evenings during school, not enough time because of homework, chores, and of course playing.  On those rare occasions where I was home sick, I remember watching the Afternoon Prize Movie with John Lanigan.  On Saturdays, the cartoons gave way at noon to Superhost Mad Theater, with an always strange Marty Sullivan donning the droopy tights and gaudy red cape to introduce the week's mix of B-horror and Three Stooges shorts (sometimes the awesome Harold Lloyd got billing).  Of course when I could, and in later years, the always bizarrely cool Fritz the Night Owl. 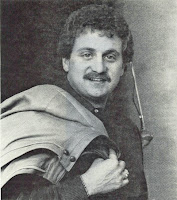 Don't know what any of this has to do with anything.  I just happened to be researching a few things when Lanigan's name flew by my eyes.  In one of those sudden gushes of nostalgia, I was back in our house on Delaware Avenue, home sick with the flu, laying on the coach in a bedroom turned family room, metal TV tray holding crackers and 7-Up, and the old console television with John pulling out postcards, calling up viewers for the chance to win a few hundred bucks.  Seemed like a lot back then.  Heck, I'd take it today.  Back then it would have been like two thousand today.

Funny how some things, some people become etched in our collective experience.  I haven't thought of old John for years.  I've remembered Sullivan more often, largely because of his connection to old monster movies I recall as Halloween rolls around.  Same with Fritz.  But the things that make us who we are, the things we take for granted, the things we just imagine the whole world knows about when we are kids, but realize later how regional and specific they were - I wonder if kids have that today.  Is there local programming, local culture? I wonder.

BTW, for what it's worth, I didn't watch Flippo the Clown.  I was never scared of clowns, but he put the fear into me.
Posted by David Griffey at 10:21 PM