To keep Chris Christie from being president 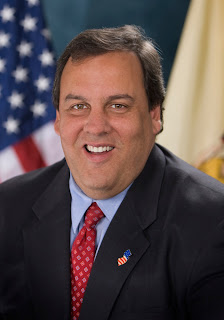 I would have my teeth drilled without Novocaine. I really can't abide him.  Pardon a break from my usual avoidance of politics and my reluctance to spew out at individuals, but he really embodies everything that is destroying the GOP and that I detest in politics.  In my opinion, he's a loud mouth, blowhard hypocrite bully.  Telling teachers and others on the public payroll to screw themselves and deal with it, while using a tax based helicopter to fly his kids' baseball games.  Sure, he gave it back when he was caught.  But can there be anything less credible character or moral wise for a boisterous politician like Christie to do?

Of course he has sucked up to the Democrats and Obama in an ever obvious attempt to gain favor with the media.  And now he has jumped on the 'time to take the first steps to outlaw opposition to gay sex' bandwagon.  I know such therapy is controversial, and I'm sure some of it is just quackery.  But most popular advocacy of homosexuality is also quackery, since most serious agencies and institutions admit (albeit behind closed doors when there are no reporters) that homosexuality is complex and nobody really knows what causes all cases*, despite the popular narrative that science has proven God puts a gene in a person that makes being gay the same as being black.  So I'm sure there are some cases where therapy could do good.  Isn't that up to the patient and the doctor or therapist (see Abortion arguments for examples)?

But no.  The post-Christian Leftist totalitarian juggernaut is gaining steam, and people like Christie jump up and wave their hands saying, "Pick me!  Pick me! Traditional Christians suck, so I'll screw them legally!  Pick me!"  And of course he's getting his kudos, high-fives, and well dones from Gay Rights groups, leftists, Democrats and others.  Which he will, until he gets the GOP nomination. Then, just like what happened to McCain in 2008 and Romney in 2012, he'll be skinned alive.

If the GOP has become not just so stupid, but so morally vacant as to celebrate 'No Morals, Just Money', then I'm done with them.  Others trying to be serious Christians and faithful Americans have bent over backwards in recent years, excusing gross incompetence, lame reasoning and impotent stances on key issues.  But if the party continues its losing strategy, and nominates someone like Christie, bully par excellence willing to crush rights and piss on traditional believers to curry votes and achieve power to bully all Americans, then they've got the last vote from this fellow who will gladly go back to being Independent.

No one knows what causes heterosexuality, homosexuality, or bisexuality. Homosexuality was once thought to be the result of troubled family dynamics or faulty psychological development. Those assumptions are now understood to have been based on misinformation and prejudice. Currently there is a renewed interest in searching for biological etiologies for homosexuality. However, to date there are no replicated scientific studies supporting any specific biological etiology for homosexuality. Similarly, no specific psychosocial or family dynamic cause for homosexuality has been identified, including histories of childhood sexual abuse. Sexual abuse does not appear to be more prevalent in children who grow up to identify as gay, lesbian, or bisexual, than in children who identify as heterosexual.  From the American Psychiatric Association (emphasis mine).
Posted by David Griffey at 7:57 PM