Tyco style that is.  Remember this: 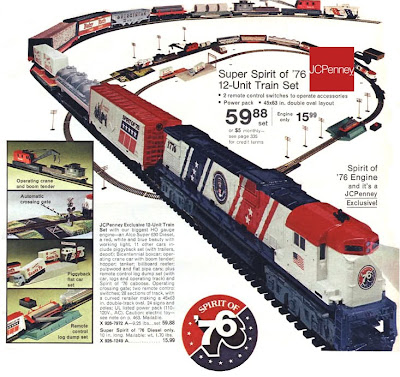 Yeah, I remember that.  The year was 1976, or maybe earlier. Even though my Dad was a train engineer, oddly he never put much into model railroad layouts.  Unlike many who worked on the railroad, who got into the whole 'railroad hobby and collectibles', Dad approached it like a job. I once asked why he didn't have a model railroad layout.  He said when accountants have model accountant layouts, then he'll consider it.  It was just his job.  He went to work, short sleeve polo shirts, jeans and sunglasses, ran his train, and came home.  So it wasn't as if every train set that came along made it into our house.  There was a commercial for it (a commercial for an electric train set - haven't seen one of those for a million years).  I actually wanted set in the worst way.  My Mom took me to some matinee in Mansfield, where we watched some cartoons and maybe a movie, I don't remember.  Then there was a raffle drawing for a stage filled with prizes, one prize being this set.  As usual, I didn't win anything.
Posted by David Griffey at 8:30 AM