There are two kinds of people today 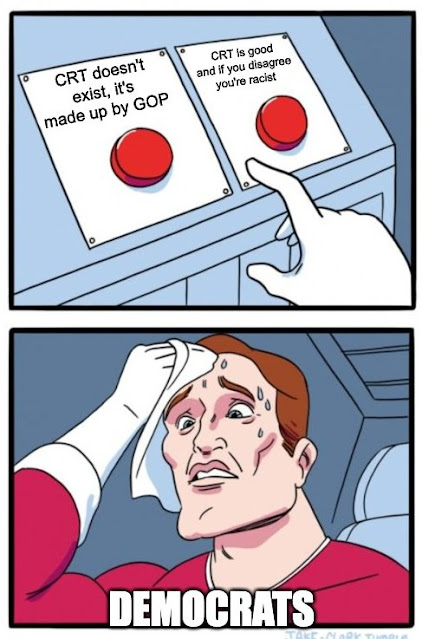 There are those who oppose Critical Race Theory.

I can't say the second group is made up of those who support Critical Race Theory.  Why?  Because among those who oppose those who oppose CRT, there seems to be no consensus.  Some say there is no such thing as CRT.  Some say there is, but it's only in colleges and nobody is wanting it to be taught in schools.  Others that it absolutely should be taught in schools.  Still there are others who seem to have no idea except they know all who oppose CRT do so because they are white racists.

So I say there are two groups.  Those opposed to CRT.  And those opposed to those who oppose CRT.  And for me, if nothing else, that's more than enough to throw my hat in with those opposed to CRT since at least they're more or less in agreement about why they oppose it.  As oppose to the other group that can't even agree if there is such a thing or you're a racist.

Email ThisBlogThis!Share to TwitterShare to FacebookShare to Pinterest
Labels: Bigotry for the Hip American, Ignorance in the Internet Age, Racism