Thanksgiving in the land of Tír na nÓg, 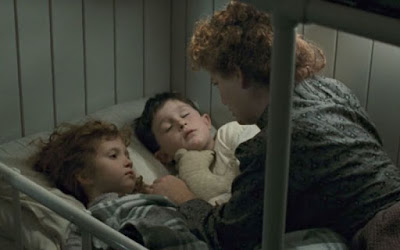 I've always been of the impression that the 1997 mega hit Titanic is not as bad as its biggest haters suggest, but nowhere near as good as the millions of fans and Oscar voters proclaim.  Like most things Cameron, it was a mile wide and an inch deep.  The advanced effects techniques make the sinking appear more realistic and was worth the price of admission.  And while Cameron mauls some historical figures to buttress his 'evil rich vs. heroic poor' template, there are some performances that stand out.

One is Victor Garber's portrayal of architect Thomas Andrews, which is the best of the bunch.  Even if the characters of the crew are at times played false by Cameron, the actors do a wonderful job, thinking of Ewan Stewart and Bernard Hill as First Officer Murdoch and Captain Smith respectfully.  In fact, so stand out was a young Ioan Gruffudd as 5th Officer Lowe that his small part nabbed him the lead in the blockbuster BBC miniseries Hornblower.

Another memorable performance was barely nodded to, and not historically real at all.  But it's a touching, sad scene, as a mother consoles her two children who are doomed to sink with the ship.  She tells them of the land of Tír na nÓg, the land of eternal youth and beauty, even as the waters begin to fill the decks,  It's one of the better scenes, belonging to the montage of those about to be swept away by that tragic event.

Well, sometimes as I prepare for another round of old traditions with the family, I think of that scene.  I imagine that's sort of what I'm doing with our boys. I feel like I'm telling them yarns of old pilgrims, or fun times of yore, or old flag waving and fireworks, or even babes in a manger, when all around us the waters of the West's downfall are pouring in.

Things are happening fast now.  Resistance has failed as we're learning a lot of those we thought were in positions of resistance have long ago abandoned their charge. Perhaps they lost faith in the end.  Or maybe they're just cowards.  Or perhaps it's a combination.  After generations of being assailed by the opposition and the Enemy, their faith wavered.  Not entirely, but enough to cause a loss of courage and fortitude when the hour came.  So we're seeing those we thought comfortably ready to do battle hand over their swords and raise the white flag.

Whatever the reason, there is barely resistance as the storm that will destroy the values, principles, freedoms and even lives that we've come to take for granted gathers force.  And it isn't stopping.  Almost every day from one of a thousand quarters comes an attack on anything to do with the Christian heritage and values of the West and the American Experiment.  Any moral stance, truth claim, understanding of reality is attacked, and those who would have proclaimed them last week will happily lay down arms and surrender today.

In my son's school, culturally and academically, he is beset with calls to lay down resistance and bow a knee to the Leftist State.  The values we cherish?  The Bible?  Settled science, pure myth and fiction.  Boys and girls? Are you crazy?  Celebrate Thanksgiving or July 4th?  What are you, some Nazi who revels in white supremacist genocide?

It makes me think of that Russian official asking the constable in Fiddler on the Roof of his view of the Jewish citizens of Anatevka. I can just hear the powers of our society staring people down and asking, "Do you like these troublemakers, these white Christians?"  Even if they're white or Christian, the resounding answer is always, "Of course not!"

And almost every day, you see more and more jumping ship and swimming to the good ship godless paganism. Every day it seems someone feels inclined to buckle somewhere.  Some premise of the million premises of the Left used to destroy life, freedom and the Christian world view is embraced and celebrated by those who should know better.

How much longer these traditions will be a part of our culture is up for grabs, but I'm betting I'll live to see them pass, along with the morals and foundations for culture they represented.  The new culture is one that celebrates ancient pagan societies, not despite the fact that they practiced infanticide, human sacrifice and genocide, but because they did.

After all, the great accomplishments of our godless age is ttwo world wars, nuclear warfare, the aborting of pregnancies by the hundreds of millions, lifestyle driven pandemics that have claimed lives in the tens of millions, all while depression, drug addiction, drug dependency, random crime, random mass killings, and suicide rates are soaring.  And yet it's winning.  The side that has brought us into such an age is seizing the day.

I don't know who future ages will despise the most.  The forces that convinced us terror and oppression, slaughter and debauchery are fine as long as everyone else suffers?  Or the ones who saw this for what it is, but appeared powerless to stop it.