Ah, Halloween.  Years ago it was quite a thing.  For the three oldest, Halloween was simply one of many checkpoints along the way to that holiday of all holidays, Christmas.  But we made a big go of it and had many fun times.

Even though they were ready to hang up the Tricks or Treats as they got older, they stayed with it.  This was to make sure their youngest, nine years younger than our third son, would have a sense of belonging to the same stories and traditions as the other three.  To that end, they did yeoman's work making sure that, to the best of their ability, he got to take part in things the way they did growing up.

It was always a tad different, I'll admit.  When we first did our 'Ghost Run' at a local cemetery, it was purely improvised to fill in time before a local football game.  Even as it became a tradition, it was with three young pre-teen boys who ate up the ambiance of cemeteries under grey October skies during the Halloween season.

They tried to keep up the same 'excitement' for their brother's sake, but it wasn't always easy.  As any adult with kids will tell you, one mark of being a parent is wondering how you had so much fun as a child with such simple pleasures.  I always knew the older three were doing their best to put on the show of excitement.  Sometimes I think their youngest brother could also tell.

As the years went on, it became tougher for them all to be around on the same days.  A couple of times work or other social schedules beckoned, though they did their best to set aside time whenever possible.   Three years ago they were planning on moving onward and out in order to transfer colleges.  The plan was for them to move in together to reduce expenses.  Nonetheless, they promised they would still make time for their younger brother if at all possible.

Then came Covid, and that changed things.  Their plans to move out got derailed.  Since then, they've hunkered down and decided they will move out when have to, rather than just move out to move out.  The money they save being enough to set them up for a decent nest egg and rainy day fund in these troubled times.

Being home at this age, however, doesn't make it any more likely to be around.  Due to social lives, increased work demands, promotions, moving upward into higher levels of college coursework, all conspire to keep them gone more than around.  In many ways, the home is a glorified bed and breakfast for them.  Though they try to spend at least one day with the family and one with their brother, it's not always all of them.  So at any given time, we get it might not be this time they can pull it off.

Despite all of the change, this year they did it again.  They moved a few mountains, cashed in a few favors, and made sure they were here to go out with their youngest for old times' sake. Our youngest has made friends with the brothers of our second oldest's girlfriend (who also accompanied them around the neighborhood this year for Tricks or Treats).  We managed to get things in, if not in abbreviated manners and sometimes with tight schedules tugging at our elbows.

But it was fun.  Given his basic attitude, I guess he won't go out next year even if the chance is there.  My mom, of course, must stay indoors at this time.  My son's girlfriend's dad actually came over and sat with me to hand out candy.  A good family, and a good girl - a father could wish for worse for his son.

So, in the spirit of old blog posts when I used to have such updated at various times of the year, here's a quick pictorial zip through our Halloween festivities.  Much has changed, but in it all, the family is here, the boys are still close, and I'd call that a net win for these crazy times. 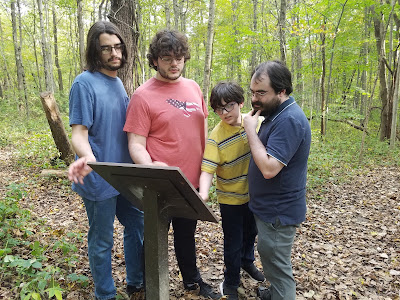 They had a day off at the beginning of the month.  They decided 85 degrees just didn't strike that autumnal feel.  Even though we found a path only my second son had walked, we pledged to come back again on Halloween, weather permitting. 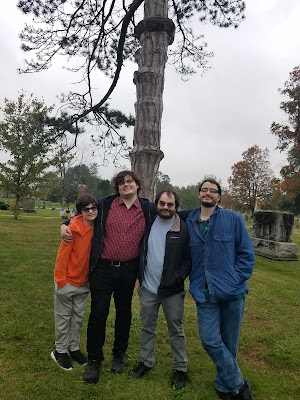 Before Halloween, one evening when the boys were home we decided to go back to the cemetery where our "Ghost Runs" began all those years ago.  The tree is a favorite and you can't miss it.  The rest of the cemetery has many proper spooky locales. 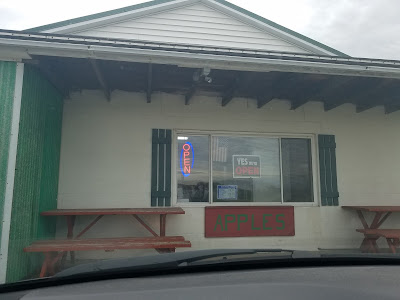 As fortune had it, all sons had a day off the Thursday before Halloween.  That allowed us to pile in the van with my mom and drive back to my old stomping grounds an hour or so away.  The orchard has its own cider press and presses the cider fresh right there.  It's worth noting that orchard was where I went to my very first school field trip in kindergarten so many ages ago. 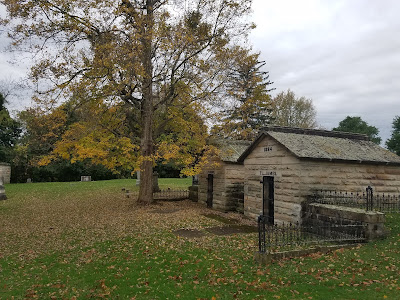 After the orchard, we stopped by old Rivercliff Cemetery, near where I lived when I was a lad.  We've done that quite a lot in our Autumn festivities.  I've seen many cemeteries in my day, but never one with so many locales that scream 'Gothic' like it does. 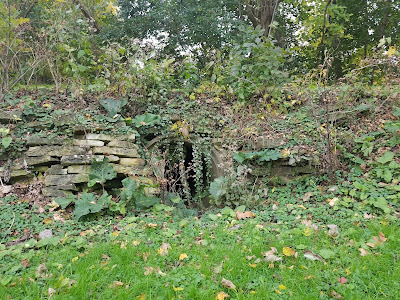 Even after all these years, you stumble onto something you've never seen.  I'll admit I was at that cemetery many, many times over the years.  Yet I had never seen that culvert before.  The boys said it had a perfectly Tolkienish look about it.  If you told me a barrow-wight lived there, I'd believe you. 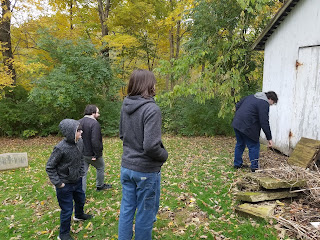 The boys investigate a shed behind the cemetery's main mausoleum.  They noticed it had been moved, and were a bit curious.  Given the history of erosion there, I told them that, like many things, the explanation was probably rather mundane. 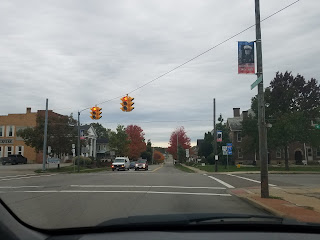 The town I grew up in.  I didn't realize how Bradbury-ish it looked.  Upon coming to the hilltop I expected to see the lightning rod salesman strolling by under those autumn clouds. 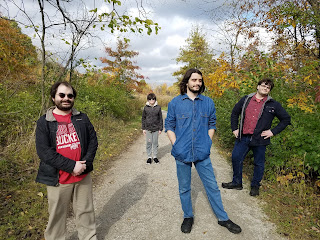 Halloween proper.  Large, billowy clouds and another walk through the longer path in the woods on a crisp October day.   I simply asked them to stop and turn for a picture and they gave me an impromptu album cover. 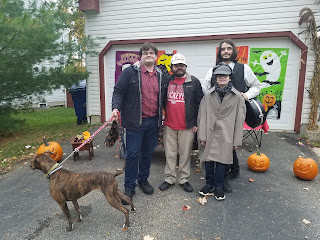 Ready to Tricks or Treats.  Our youngest was talked into going out by his new friends. The others invested lightly in costumes, my second boy and his girlfriend dressing like musicians of various backgrounds. Our youngest did a hasty Sherlock Holmes, taking the hat and coat from my oldest who, for many years, was our resident sleuth.  Or second oldest was content to control the pooch. 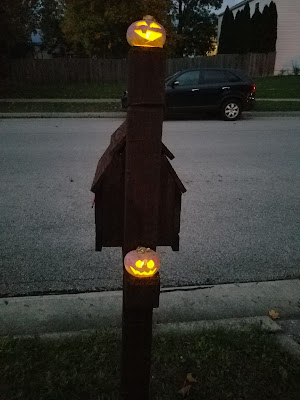 A seasonal favorite that catches more than one reveler's attention each year.  That's courtesy of our second oldest, who started carving turnips in the manner of our ancestors from Ireland.  That's old school Halloween. 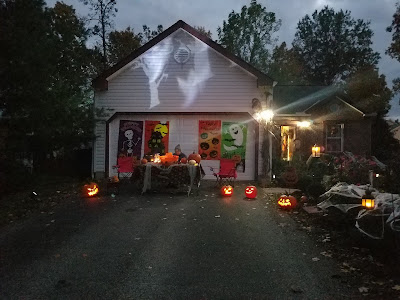 All decked out and ready to go.  We started with the table and outdoor candy bowl last year owing to Covid.  It worked well enough that we did it again this year. We used the Jack-o'-Lanterns to keep people from wandering around the yard.  You'd be surprised how people can't take a hint. 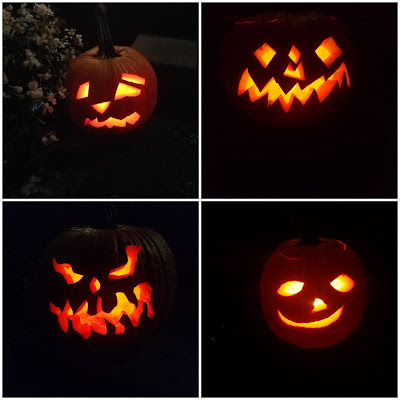 The four boys' each designed and carved their own (the youngest with a little carving help from dad).  From top left to bottom right: Our oldest, second oldest, third oldest, youngest. 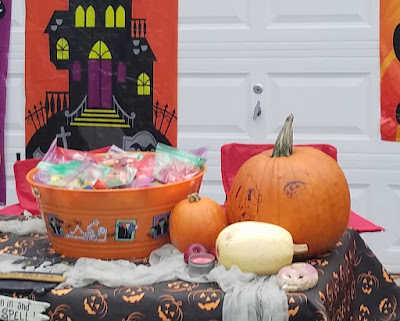 Not to be left out, my mom designed her own face on a pumpkin.  Alas, there was no way in this world we could carve it, so we put it with the candy (which was empty by the end of the night), and will carve it out for pumpkin seeds by the end of the season. Pumpkin seeds to go with our pastries, pumpkin donuts, apple cider and other goodies on Halloween Night - and I mean go, as in usually gone by the time we watch the final Halloween silent movies and specials that night. 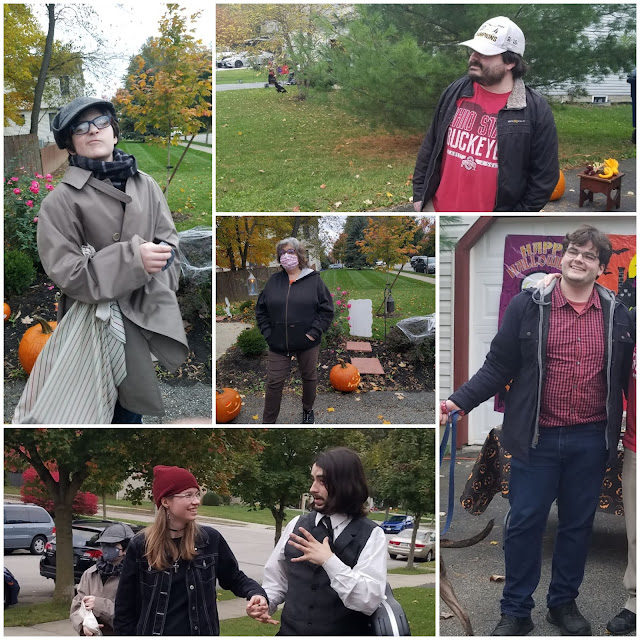 The gang ready for another outing on a fine Fall evening.  Again, maybe last time going out until grandkids - or not. We'll see.  We assumed last time last year.  My wife went out, but it tired her and she came home after about an hour.  I usually don't post pics of anyone outside the family.  Nonetheless, while I wouldn't say my second son and his girlfriend are ready to pick out curtains or anything, they've  been dating for quite awhile and have crossed that line to looking at longer term plans.  Plus, her younger brothers and our youngest have become friends.
Again, it was a fun night.  A bit melancholy, as I remember years gone by with the boys being younger and perhaps a bit more wide-eyed.  I remember my mom and dad coming down and my sister and her husband, even her granddaughter and my boys' neighborhood school friends.  Mom and my sister would go out with my wife and the kiddos.  I always pass out the candy. The joint was hopping back then, and the table of treats went fast.  Our handfuls of candy per kid were legendary.
Now it's us, with the boys picking up new friends or acquaintances, but not so much in the neighborhood to take part in these things.  My sister has moved away, her husband from that time having passed away, as did dad.  Mom is simply no longer able to go out.  My wife was barely able to now.  And they're getting older, as we all are.  Such is life.  But the trick is, enjoy it when it's happening, for every day is the stuff of future memory.  And some day, it will be the memories we have.
Posted by David Griffey at 6:30 AM