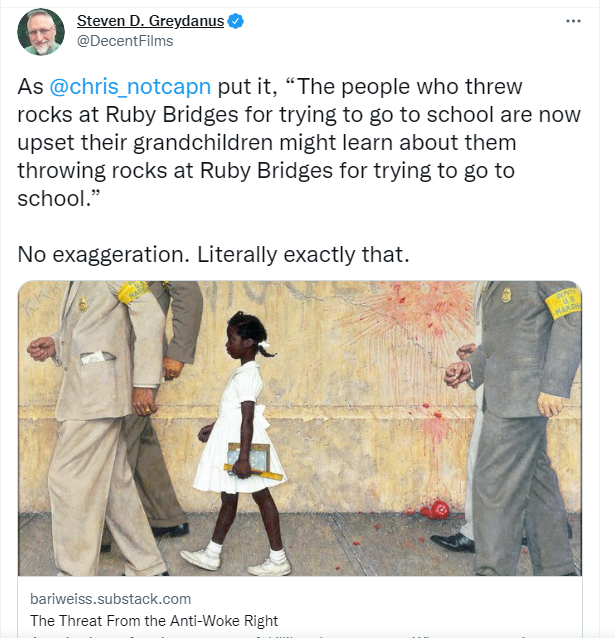 First because it's head up a donkey's butt stupid.  The idea that parents upset about teaching kids to judge based on skin color  must be descended from people who threw rocks at black kids, because obviously skin color, makes a German rhetoric from the 1930s seem sane by comparison.   The thought that some, like my mom, would be outraged at this and yet was an open advocate for black rights in the 1950s, seems absolutely lost on Greydanus and this level of partisan hackery. Ancestor blood guilt - the latest fad among the Left.

Second, it's despicable because it insists we ignore the ugly truth that many - and I mean many - who are upset about this racist movement called Critical Race Theory (that does and doesn't exist at any given movement) are not white.  They are blacks and other minorities who don't want their kids to be taught to see themselves as hapless victims awaiting brave white crusaders to step in and save the day.

And it's not just those conservative blacks who never seem to matter in the equation.  Some blacks and other minorities who were protesting at a local school district a couple weeks ago didn't sound conservative at all.  From some of what they said when interviewed by local news outlets, they sounded like pro-BLM and pro-Democrat all the way. They simply resent their kids being boxed up in swift group labels as the good deacon Greyadnus is clearly willing to do.

Or perhaps they see their kids ignored since the above stupid Twitter post demands we invoke the unperson of disobedient blacks, just like we unperson the disobedient women who blaspheme the gospel of pro-abortion feminism.  The idea that this, like so many issues, cuts across group identities seems almost abhorrent to those on the Left.

At some point he's gong to have to come back from the edge of the pit, or he's going to fall in.  I remember him from many years ago. I was never a fan of his post-modern approach to movies.  But he was never like this, nor would he ever have passed along such a stupid, false and sin laden Twitter post.  The poison that is the Left.

Oh, and I wouldn't recommend going to the article the Twitter post references.  It's not for the squeamish or the virtuous and honorable and truth seeker for that matter.

Email ThisBlogThis!Share to TwitterShare to FacebookShare to Pinterest
Labels: The evil the Left does, the Joy of Racism on the Left, The New Racism and the Catholic Left