A few days ago I took issue with a post by Scott Eric Alt.  Now, Mr. Alt has responded to me.  Read it here.  In case I muddled the previous post, let me break it down, to make sure we're on the same page.  Here is an image of the book title that seemed to be the launch point for the post: 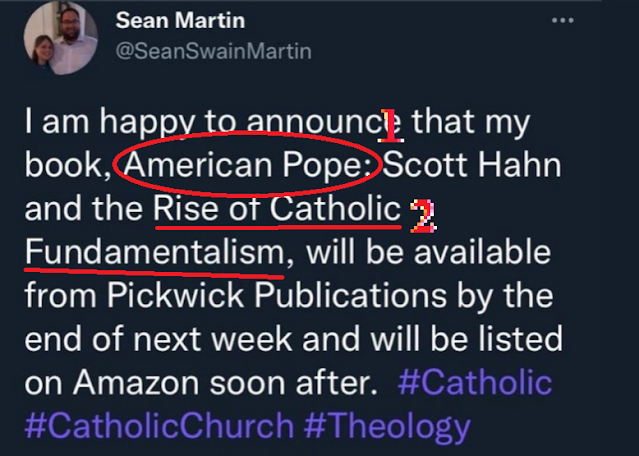 I couldn't care less what Mr. Alt's arguments about Scott Han are, positive or negative.  Or what the book has to say about the matter.  Whatever.  But what struck me in Mr. Alt's initial post that I linked to was this:

The comments on that post are as tragic as you would expect.

That highlighted sentence is what jumped out at me.  The 'Gee people, isn't a faithful Catholic allowed to offer a mere criticism of Dr. Hahn?'  Please.  That sounds like an over the top objection from a Pee Wee Herman movie.  The reaction of Leila Miller was a reaction to a deliberately provocative and accusatory book title and we know it.  If you don't like the over the top reaction, then say the same about an over the top book title.

Sure, if you want to criticize Scott Hahn, then do so.  Heck, if you want to criticize those who still think Scott Hahn adds value to Catholic teaching, by all means.  But the Jerry Springer level click-bait book title is meant to do just what it did..  The 'Hahn American Pope and Catholic fundamentalists' aren't academic assessments or careful journalistic uses of terminology.  As Terry Mattingly at GetReligion was fond of pointing out, they're being used here to take broad swipes, and Mr. Alt knows it.

Which, as I said my post, is the problem.  The 'let your yes be maybe to give yourself a slick exit just in case' is more at home with the Father of Lies than the Father of Light.  We darn well know that book title was meant to do something, and acting like we're shocked that it did so is the same rhetorical sleight of hand all too common today.  The same level of duplicity we see when late nigh political activists insist they're really just humble comedians, so why the fuss?  So for heaven's sake, don't play the part of the hapless babe who just can't understand why those fundamentalists are so defensive.  It's unseemly and a bit cowardly if you must know.

I will make one factual correction.  Mr. Alt labels me a 'pop apologist'.  I'm not an apologist, nor do I claim the title apologist.  That's why I spend little time on this blog unpacking Catholic doctrine or defending the Catholic faith against detractors and skeptics. That's for people with the time to put in the work needed for reliable apologetics.  I'm just a fellow who looks at the news and the goings on of the day and comments on how those impact a Catholic convert in a changing world.  I also watch what others on the Catholic Internet do and how I believe that helps or hinders the cause.

Oh, and since I do allow comments, Mr. Alt is free to comment here if he's up to it. .

Email ThisBlogThis!Share to TwitterShare to FacebookShare to Pinterest
Labels: Catholic blogging, Other Blogs