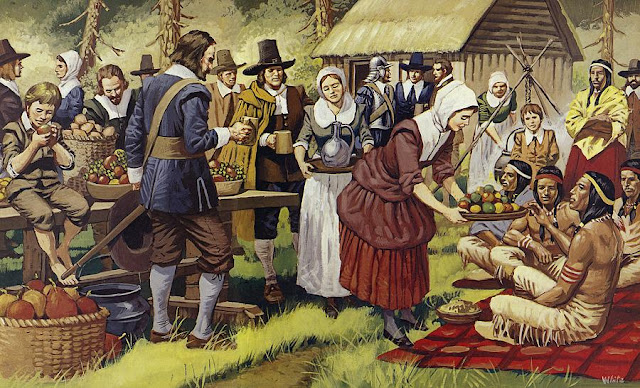 You could be forgiven for missing the fact that this was the 400th Anniversary of the first Thanksgiving celebration in the new Plymouth colony.  That's because most news stories have been about the call for Thanksgiving to be abolished, it legacy of genocide and white supremacy and imperialism erased.  Indians, we're told, were perfect, too good for Jesus, and completely innocent of sin and wrongdoing.  You'd think something so stupid would be an SNL skit, but it's real.  It's taught in our colleges, and reported in our news.

Those of us who are going to be in the Christian diaspora will have to cling to our traditions despite living in Babylon.  We're about to find out what being a Christian in ancient Rome pre-Constantine was like.  That's because I don't think it's going to stop at banning a holiday turkey with stuffing/  And unlike the historical United States with groups such as Amish or even Indians on reservations, this will not be a passive aggressor.  It will not stop until all have bowed a knee to the new State and its blasphemes.

Meantime, we will still celebrate of course.  And we will continue to do so no matter what.  Like most historical figures the Left seeks to destroy, the pilgrims were better than we are.  We who are the reason everything is being destroyed.  People with the pilgrims' resolve, their courage and their fortitude would not allow this to happen.  Perhaps it's knowing this that so many are willing to watch their legacy be erased.  After all, there's nothing more damning for a failure to confront than a success.