I underestimated the rot 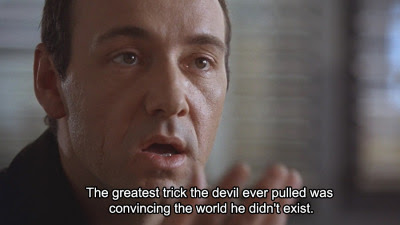 Fast on the heals of my post about some pretty bad Scriptural messaging, I was reminded of this.  Yes, once again it's professional Catholic apologist and endorsed teacher of Catholic social teaching Mark Shea.  And what's he saying?  That Satanism is no big deal since, you know, it isn't - this being our modern age.

What is awesome is that those Satanists are doing the good work of caring about the poor, and that's all that matters.  Sell your soul to Satan if you must, but it's far better to pledge fealty to the Prince of Darkness and help the poor (no doubt, again, from a purely non-politically partisan lens) than it is to follow Christ and not help the poor or feed the hungry or allow the migrant to live with you.

Which, of course, many conservatives actually do. Over the years I saw plenty of conservative Christians invested in helping the poor, feeding the hungry and caring for the widow and the orphan, even if outside of the parameters of leftwing policies and economic narratives.  One of the big LIES of the age is that conservatives are less charitable than liberals.  I'm unaware of a reputable study that would back that up, and my own experience suggests otherwise.

Beware.  The linked to piece is what's known as deplorable hermeneutics.  It goes beyond partisanship by a long shot. Yes, our faith without works is dead.  Yes, the gentile or the unbeliever or even the sinner is sometimes shown in positive Scriptural light next to religious hypocrites or corrupt leaders who believe their self-righteousness entitles them to the praise of God.

But that's hell and gone from suggesting we can flip the bird to the Gospel of Christ, throw your alliance behind Lucifer, and earn your way to heaven by how many care packages you give to a local charity.  That is beyond borderline heresy to suggest we get to heaven by our good works, our actual loyalty to the Lord  or Satan be damned.  It certainly belittles the reality of the satanic and demonic.

For what it's worth, the idea that Satanists - who my own son has called 'edgy atheists' - are doing nothing realistically bad by being Satanists smacks of a very secular, atheistic understanding of Creation and the principalities and powers of this present darkness.  It sounds more Hollywood than Holy Ground.  It almost suggests that spiritual warfare has no bearing on things at all, but only our material lives and material actions in an otherwise material world.

If that is the case, then people worshipping Satan would be no more bothersome than people practicing witchcraft.  Which is a very modernist spin on the reality of the Invisible of Creation. Perhaps  they can't conjure demons or place real hexes on people, but they are nonetheless aligned with and confess fealty to the forces of Darkness.  That has real implications for the religiously inclined who believe the Invisible of Creation is more than a word thrown into the Creed to take up space.

Again, I've not heard teaching in the name of Christianity this bad since Waco. That he continues to be a paid apologist with praise from Catholic leaders, parishes and institutions says all you need to know about the dire straights in which at least a section of the modern Church finds itself.  And I post this for the same reason I frequently warned my Evangelical denominations to avoid people like Fred Phelps. Such warnings are not obsessions, they are obligations on the part of those who are trying to be live out the Truth of the Gospel.