The thing about young Greta Thunberg

Stop insulting her.  You can take on the content of what she is saying.  You can take on, as I did, the Fortunate Son vibe of wealthy celebrities and their children flying around the world demanding change that will increase the burden and likely harm the lower middle class and working blue collar types already slipping down the economic ladder.

But don't make fun.  Don't insult.  Yes, I get the frustration. It's a tactic hardly unique to the Left, but like all things, because the Left and the media are one and the same, the obvious isn't critiqued like it is if the same tactic is used by the Right.  Let someone on the Right bring out some kid, some handicapped individual, some grieving parent, and who cares?  At best what they are advocating (non liberal ideals) will still be attacked.  At worst, they will be, or at least the Right (or non-liberal cause) will be attacked for exploiting people like kids or grieving parents.

Let those on the Left do the same, however, and the mass media culture will weep and rejoice and celebrate and make heroes out of whoever is advocating the leftist cause of the day.  I get how frustrating it is.

I also get how horrible it is to watch a generation of children terrorized by these wealthy activists who have presented no intention of giving up anything significant for the cause.  These kids are being told from every side that they are about to die.  They are going to die horribly and bloody.  And they are hearing it from movies, television, music, awards shows, schools, college professors, scientists, politicians, religious leaders, even the pope.

I remember being told if you had made it through puberty, then you had best get laid fast since Reagan was in the White House and nuclear annihilation of humanity was inevitable.  Really.  The television movie The Day After was simply a large scale propaganda piece meant to scare the bejeezus out of a generation of youngsters who were convinced nuclear war was months, weeks or even days away.  So I know how it feels to have everywhere you look be a giant sign saying 'You're going to die! (now quick, give us power and more grant money!)'

Nonetheless, the way to answer this isn't to insult her, no matter how light hearted you think your'e being.  This is the Left.  They can spit on, mock, attack, insult, blaspheme  or crap on whatever they want and if you don't like it then screw you.  But let someone throw out a light hearetd dig at her appearance looking like a movie character, and it's the Holocaust all over (or the usual barrage of homophobe, sexist, racist, Nazi accusations that we're used to from the Left).  As my sons said, arguing with liberals is like playing a game of Monopoly with someone who keeps throwing pots and pans at you.

So just don't lower yourself to any level, theirs or otherwise.  It won't help, it will become a distraction, and it will be used by the Left to take an entirely unwarranted moral high ground since now you've made fun of a sweet, innocent girl who is only in fear of her very life.

Oh, and just to clarify.  I don't think it is appropriate to simply insult the girl or tear her down personally.  Nor should we dismiss her concerns if she has received death threats or any such things (at least on a credible level).  There is enough substance to go after, and that includes the substance of her testimony and her lifestyle versus the sacrifice she demands of others.  It also includes her boast to never forgive.  But making fun of her looks or trashing her personally as some horrible minion this or that?  No.  Keep it on the substance of the topic at hand.

UPDATE: Once again, as if on cue.  Mark is, of course, a radical Leftist partisan who divides the world between the sheep and the goats based upon how one votes.  Hence my point.  Greta deserves a Nobel Prize, and all who have blasted her call for policies that will hurt the poor so she can remind us that with the emergent Left, there is only F**k forgiveness, are worse than the worst.  Yes, he and his readers will let fly on every level at those who dare disagree.  Those advocating the heresies for blasphemous debauchery and narcissism in the hopes of a secular police state dedicating to eradicating freedoms and liberties must play fast and loose with fair play.  Hence my point above.  In Mark's case, once again he's merely a freakishly radical version of what you will see across the Left.  Sometimes when dealing with children, remaining the adult in the room can be the only hope for moving forward. 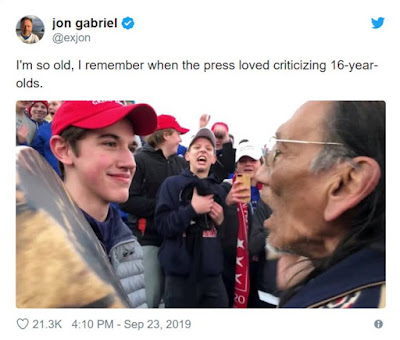 Yep.  When good Whole Life Christians joined in and ripped the young teenager to shreds, trashing him and even standing by when he received death threats because his skin color made his guilt clear (it was later shown that all accusations against him and the other students were false).  Again, trouble figuring out how Christians could fall into line with the powers that be in Germany, c. 1930s?  Look no further than the euphemistically titled 'New Prolife Christians.'
Posted by David Griffey at 7:43 PM