Suggestions for youth who are panicking about Global Warming 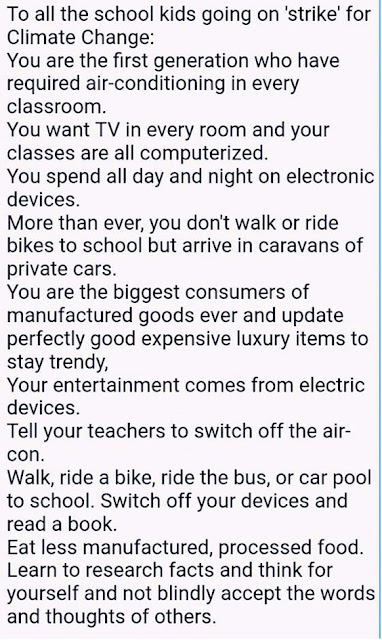 Yep.  And I could add more.  I've often told my sons about going to school without air conditioning, or not having it as I grew up.  Heck, my parents wouldn't use air-conditioning even if the house we moved into had it, unless the temps got up to bright side of Mercury level heat.   All in all, with few exceptions, we had no more in terms of electronics and pollution than my parents did in the 30s.  We had TV, and they didn't.  We had cassette players and they had only record players.  They had electric stoves and refrigerators and washers and driers as we did.  I don't think we had a dish washer until I was out of college.  We did have a microwave.  That's about it.

Now, of course, most of what we have is plugged into something.  We have phones - needing electricity and hence power, and computers or laptops or tablets - needing electricity and hence power; we have televisions as always, and multiple electronic devices.  I know of no modern buildings that don't have air conditioning and that don't use it.  I see lighting for decorations, massive lighting displays on a variety of holidays, not to mention the sheer size and volume of electronic everything today.  Of course this doesn't include video games and computer games and other electronic equipment that chew up far more carbon than our old ball bats and footballs from back in the day (it's worth noting I saw a story on the decline of interest among up and coming generations in things like sports).

I've said a thousand times that I absolutely believe it when scientists say STEM has caused climate change.  Every day I become more and more convinced that the way in which we approached the scientific revolution and subsequent industrial and technological revolutions reminds me of a couple kids finding the keys to their parents' liquor cabinet while the parents are away.

Sure, at first, it looked all peaches and cream.  Everything could be solved by science and math, and industry and technology will fix all the problems.  Give it all a blank check and we'll fix the world.  Though even at the beginning, there were those who expressed concern about either the physical changes, or at least the social ones.

But now, after the last century, after a growing list of problems attributed to various forms of the STEM family, at seeing the limits of science, and how often the scientists and experts and researchers of the past ended up being wrong, you'd think we'd be rethinking the whole thing.

Instead, it's as if those kids with the keys to the liquor cabinet woke up with a horrible hangover from drinking too much whisky, admitted it was the whisky, and are now hellbent on drinking yet more whiskey to make them feel better.

As it is, if we are really serious about his being the crisis of all history and the world will be destroyed by 2100, then we would be making serious, radical and all-bets-are-off changes - including changes that impact ourselves.  Instead, we are seeing people who want others to do the suffering so they can go on living a life that has brought us - per the science - to the very crisis they're panicking about.
Posted by David Griffey at 7:15 AM