So this is what our neighborhood looked like under an unusual Friday 13th Harvest Moon. 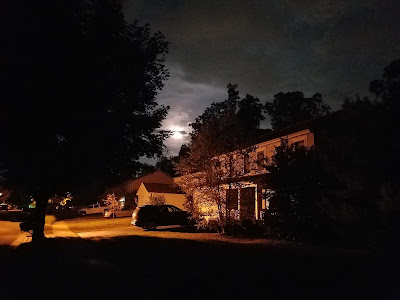 Creepy, huh? Well, check this out: 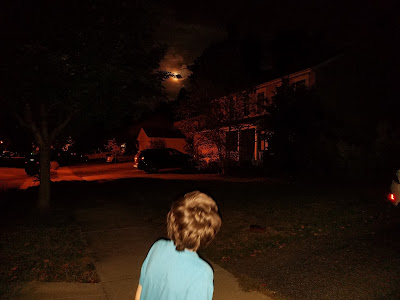 In what looks like a photoshopped picture of my youngest, he is actually there, looking at our normally tranquil neighborhood, made all the spookier by the moon and some strange (and unintentional) camera effects.

Naturally we couldn't let a night like that slip by.  Our sons were all there last night, owing to days off, or recuperating from sports injuries, or simply having time between jobs and school.

In a nod to olden times, we got some apple cider, pumpkin donuts and even some pumpkin snickerdoodles, and plopped in our DVD of the 1970s miniseries Salem's Lot, based on Stephen King's novel of the same name.

It's one of many we will watch over the course of the harvest seasons up through Halloween.  Better than the 2000s remake, it lacks the jaded cynicism and 'everyone basically stinks' attitude behind the remake overseen by King.  It also has James Mason, and that's always a plus.  After viewing the first half, we went outside for picks and gawking at the moon which my youngest was sure would be passed over by a witch.

But overall a fun time.  We don't have as many times like this since the boys have grown, but they live at home to cut expenses and avoid crushing debt for college.  When they do have time, and aren't out with friends or dates or whatever they do, they will still hang with us (or, in my second son's case, even schedule a date earlier in the day so he could be with the family last night, since we all knew about the cool moon which he wanted to enjoy with our youngest).  Fun stuff to be sure.
Posted by David Griffey at 11:44 AM