The student climate change protests in a nutshell 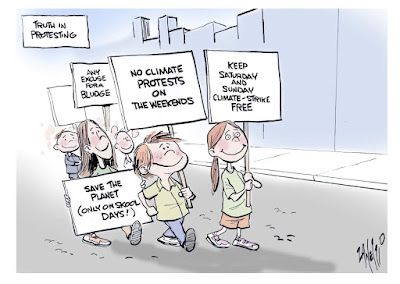 It may be the end of the planet, but don't expect us to give up a good weekend.  The whole Global Warming movement is becoming the farce of the ages.  Not that there isn't truth to the fact that STEM has harmed the environment.  But that's hell and gone from the lesson we're taking away from this.

Nope.  As I said here, it's yet one more 'please make changes that will hurt other people in order to make this a better place for me to live' cause of the ages.  This is accomplished by some of the most glaring hypocrisy and stupid assumptions imaginable.  Remember, one of the key mantras of the Global Warming movement is that it's true because the majority of scientists who are good people say so.  The ones who disagree are the bad people.

Think on that.  How stupid would you have to be to believe that?  And yet from the pope to presidents and world leaders to celebrities and even delivery truck drivers, it is as true as boys will be girls.  Such is the most educated and scientifically advanced generation in history.
Posted by David Griffey at 10:00 PM