So a guy said he saw Kavanaugh do something sexual at a party back in college that others might have pushed him into doing and it involved a woman.  According to CBS, the woman so named has stated she doesn't recall the event.  Therefore Democrats are calling for impeachment while declaring the entire confirmation hearings a sham.

We'll see.  It's the 21st Century, so old notions of burden of proof, presumption of innocence, equality before the law and due process don't necessarily apply.  More and more Americans, apparently, approve these developments.  I think I can agree with Senator Lindsey Graham when he said God help us if the Democrats ever get power again.

UPDATE: The NYT, making the National Enquirer seem like quality journalism by comparison, has revised its story (this time not at the demand of Democrats) and admitted the woman in question does not recall the event in the accusation.  At this point, according to reports, no other evidence or documents but the former Yale student's accusation has been produced.  Again, like Agent K, I'm beginning to think we're better off perusing the publications along the checkout lane at the grocery store than reading anything we used to consider actual journalism.

UPDATE II: Bwa ha ha ha!  So it looks like the fellow making the accusation was none other than Hillary Clinton's lawyer during the (Bill) Clinton Impeachment scandal.  No bias there!  This is just gossip at this point. The good news is that even the most fanatical leftists apparently withheld jumping on this bandwagon.  Perhaps they've been burnt by 'Yesterday Trump nuked the world!' headlines once too many times. 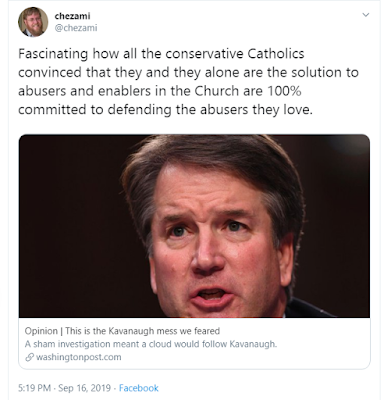 I wasn't going to bother when I was shown this, but then I noticed the time of the tweet.  That's well after the NYT revised its story, and the bulk of the press dropped it like a hot potato.  After all, the woman named in the accusation has denied it happened.  I mean, hello.  If the person who is the supposed victim says it didn't happen, it's difficult to move forward with the lynch mob.

Nonetheless, this is Mark.  In my defense, it doesn't disprove what I said about most pundits showing restraint on this.  I don't consider Mark anything sane or balanced, nor would I compare leftist pundits to him.  That wouldn't be fair to leftist pundits.  Mark exists on a different plane at this point, and I don't use him to judge leftist Catholics, or leftists, or anything.  That would be like using Jim Jones to judge Protestant ministers.  His clear lack of concern over the truth of a life destroying accusation is enough to know that the Truth and facts are far from things he cares about.

Oh, and I did hold my nose and go to his Twitter feed to make sure he hadn't posted a correction or removed the tweet.  Just to cover my bases and extend to him the same consideration he doesn't give to others.   As of this update, he hadn't.  FWIW, it was a dirty business.  I thought of the old Laverne and Shirley TV show when one of the girls would have to go into Lenny and Squiggy's bathroom.  They would run in screaming, get what they had to get, then run out screaming until they had to take deep breaths.  That was me going to Mark's Twitter feed.  Hopefully I'll never go there and have to see that again.
Posted by David Griffey at 7:22 AM