Salem's Lot and the epidemic growth of the Left 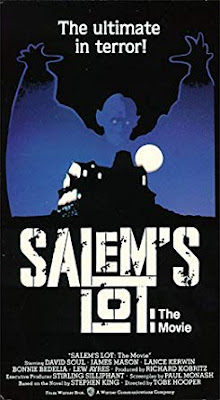 So we've started our seasonal binging, as I said, with the usual harvest vittles and a showing of the 1970s television special Salem's Lot.  Based on Stephen King's novel, it's one of the better adaptations that still tries to stick somewhat close to the source material.  Generally King's works and subsequent films go a long way toward proving that old adage that great literature makes sub-par movies, but sub-par literature makes for great movies.

The plot is fairly well known, and the allegory behind King's vision about the story is also known.  Vampires come in to infect the small, homogeneous Maine town of Jerusalem's Lot.  The good and the bad get taken down.  That is something King forgot in his 2000s remake, where he decided that almost everything has to have something to do with sex, PC categories must be maintained, and everyone has to more or less be a lousy person or a jerk.  In the book, and the original miniseries, there are actually good people who are victims along with the bad.

Anyhoo, I got to thinking as we watched the second night about this plague of vampires taking out this small New England town.  I thought of what we're watching with the encroachment of the Left.  Every day you see more of the crazy.  Every day some person is blasted for being white, or male, or heterosexual.  Every day we're told Christianity is a hate crime, or believing that there are boys and girls is a punishable offense.  Every day I see more stories about someone's name erased from the records for living in the past with white skin, or a black artist refusing to play classical music written by white racist composers.  Every day I see cases of people being punished for suggesting boys and girls exist, or all of the dogmas of the sexual revolution might not be a good thing.  Every day you see more and more cases of schools, businesses, groups and institutions banning, censoring, punishing based on what the skin color, gender, national origin, ethnicity, sexual desire or religion one happens to be.

And you sit back, jaw agape, and wonder how this could happen.  How, so quickly, have we turned a corner?  It came to me when my sons pointed out that in the movie, as well as the book, it was still a cross that the vampires feared.  They asked if Christianity was still popular back in the 70s.  I said we were pretty secular, but Christianity was sort of the default.  If we didn't believe most of it, it was still the God and general world view of Christianity that we turned to in a pinch.  They pointed out that now, in only the last decade or so, that is no longer the case.  If we need a default spiritual answer in a movie, it's some Eastern mystic, an Islamic imam, perhaps a rabbi, but no longer a Christian.  If the Christian is there, he's most likely the token bad guy; a racist, zealot, bigot, homophobe, science opponent, sexist, child rapist or simply non-existent.  If it's mentioned at all because of source material (Capt. America), then penance is done later by making sure Capt. America affirms the glories of gay marriage or something post-modern.

How did this happen?  How did the most prosperous and free civilization in history decide it's time to throw it all away?  I'm reminded of those from both Nazi Germany and the former USSR who spoke of one big similarity: They never imagined everything could happen as quickly as it did.  By 1930, the Russians were stunned at the speed with which everything collapsed.  By 1936 or so, most Germans felt there was nothing they could do, everything had changed overnight and now there was no stopping it.

Just like the vampire plague.  At one point Ben Mears, the protagonist, explains that it is a fast sweeping epidemic of vampires.  One bites another, and they each bite another, and now it's four.  And those four each bite another and it's eight.  And on and on it goes.  Until in only a matter of days, dozens, and then hundreds, will be infected.

That's what's happening in America and the fading West.  The two pronged assault of the Left - mythologizing the rest of the world while destroying the heritage of the Christian West - is bearing fruit exponentially. More than enough non-white, non-Europeans and non-European Americans and  non-Christians are happy to join in the trash-fest along with white liberals, so that now on a daily basis we see more and more tearing away at the foundations of all truth and assaulting anyone in their way.

If you would have told me ten years ago that someone could be fired or thrown out of a class for saying there is such a thing as boys and girls I wouldn't have known what to say.  No joke would be that stupid.  You could have said the world would prove to be square and I'd have believed you more than that.  Likewise if you told me that a growing number of people would see the rule of law, presumption of innocence, equality of justice and even Democracy are vile white nationalist tools for oppression that need to be eliminated, I'd have blown beer out my nose in laughter.  But now look at it.  That is an epidemic.  That is a viral infection.

Already it seems bleak.  A great many are going along with it.  We've seen the post-conservatives, the "New Pro-life" types, those who are trying to straddle one foot in the church and the other with the vampires.  People who, only a half dozen years ago, you'd bet would never accept what they are now accepting. And in all cases, the line gets drawn closer and closer to the coffins, and farther and farther from the crosses.

Will we be able to stop it?  Is it already past time to hope for a turnaround?  I don't know.  It just came to me watching that old 70s miniseries.  I wondered if anyone in the production of that 70s miniseries would guess that in only a few decades, they would be judged guilty because of their skin color, their national origin, perhaps their religion, or the fact that they had the temerity to be born then instead of the pure infallibility of 'now.'  My guess is not. What will it be thirty years from  now?
Posted by David Griffey at 7:42 AM

Email ThisBlogThis!Share to TwitterShare to FacebookShare to Pinterest
Labels: Musings, The evil the Left does