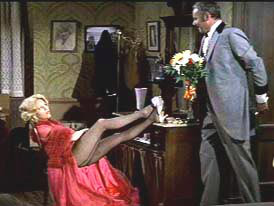 So CBS news just had a round table discussion last night with men taking part in "#MeToo".  I thought, when they first mentioned it, that it would be men who have experienced various forms of sexual harassment, lewd talk or direct threat by women of power, or at least in the workplace.   I know I've seen that over the years, and I'm sure I'm not the only one.

Nope, it was a bunch of men apologizing for being men, saying that men are just taught to treat women like scum from an early age because they are men, and it's time they realize that a girl in school next to them is just as strong and smart as they are.

That led one of my sons to ask if women are just as smart and strong as men, then why are they particularly vulnerable to men?  After all, if they're just as strong, then men have no special advantage over women?

Of course he was trying to use logic against a movement that abhors the same.  The point isn't whether or not they're being consistent, the point is that women get what they want.  Give the lady what she wants, went the old sales pitch.  And so it is, for the time being.  If women being the weaker sex who are vulnerable to men benefits women, then so it is.  If women being just as strong and completely equal and the same as any man benefits women, then so it is.  If that seems to contradict, then you're starting to figure out the essence of modern progressivism.

Right now, using a just anger against the worst expressions of a culture of sexual permissiveness has become, as do all things in the world of leftist politics, a club with which to bludgeon any traditional world view.  Men must go.  My wife - who is no slouch when it comes to being against sexual harassment - nonetheless, as a mother of four sons, is alarmed at the sudden 'women are always innocent and immaculately conceived, but men are usually scum and it's time to do something about it' attitude.  That so many men are embracing the same attitude doesn't comfort her.

Where the Church will fall on this, I don't know.  You can't deny the obvious problems with sexual assault, rape and misconduct, either through the ages or in recent years of culturally celebrated sexual debauchery. We should't deny any of it of course, and that includes when aimed at men.  Nonetheless, the growing narrative that somehow women are always perfect, honest, innocent and victims of #evilmen, should right away set off alarm bells and whistles.  Remember, a good cause can be hijacked by a corrupt movement.  This could be a grand example of such a sad historical truth.
Posted by David Griffey at 4:30 PM