In a world where humans are a threat to the planet 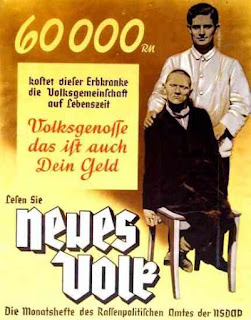 And obese people were finally called fat slobs again because of the cost on healthcare, don't be shocked that in good old Europe - dream land of socialized medicine - we have a handy explanation for the financial burden of people with Down Syndrome.

Yep, you heard that right.  Merry Christmas!  Here's how much people with Down Syndrome cost. Logical conclusions to follow shortly.  We often forget that the Nazis were not some freakish exception to the post-Christian European intellectual landscape of the late 19th and early 20th centuries.  We tend to downplay the fact that, among not a few thinkers of the day, humans were nothing but glorified animals, a view that received a tremendous boost from Darwin.  All they had to do was puzzle over what the ramifications were.

Those of us alive now know some of those ramifications.  But it is a curse of the modern progressive world that our generational arrogance is at such stratospheric levels that we actually believe we can do the evils of yesterday and this time it will be just swell.  Hence the growing love for censorship, government mandated morality, propaganda, violence and destruction in the name of political causes, once reviled by the Left, now embraced and justified by the same.

But this should send anyone screaming out into the streets.  This is exactly how the Nazis did it.  They seized upon the intellectual cloud of the day - that is, now that humans are animals what does that mean? - and added their own stamp.  In our case, the intellectual cloud is 'we know humans are a threat to the planet and each other, so what do we do about it?'.  Now that the gentleman is able to explain the financial burden of imperfect people, we shouldn't have to be too creative to see where it can lead.

I realize conservatism can often be wrong.  As often as not, it's wrong because it won't admit to changes that are needed.  And, of course, it can at times find fellowship with others who conserve things that should never be conserved.

Nonetheless, the emergent Left is a force of evil.  It is heresy, blaspheme, tyranny and pure evil, plain and simple.  It almost joyously looks to the fathers of 20th century terror and suffering for inspiration, and is increasingly open in its willingness to use whatever means necessary to eliminate all who stand in its way.  And its goals are clear: tyranny and oppression, extermination and violence.  If we let this horse out of the stable, it will be on us.  At least the world in the last century had no reason to see it coming.  We have them.  What will be our excuse?

Oh, and another reason I left Patheos?  Because there would be visitors - not just trolls who would argue Hitler to win an blog debate - who would defend this.  I have better places to be than one that approaches future genocide with an antiseptically balanced appraisal.
Posted by David Griffey at 8:08 AM

Email ThisBlogThis!Share to TwitterShare to FacebookShare to Pinterest
Labels: The Coming Storm, The Leftist Juggernaut