A date living in infamy 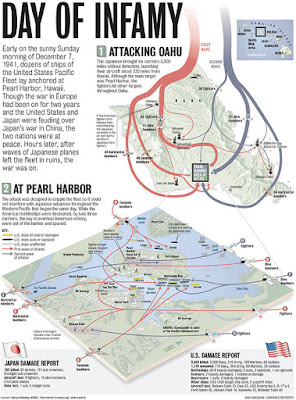 Donald McClarey has some interesting tidbits about this infamous date that, like so many dates, is quickly fading from memory.

Pearl Harbor was what 9/11 was, but for a different generation.  Had it been 9/11 and the 9/11 generation, then Japan and Germany would likely have continued largely unhindered.  The emphasis in America would have been scoring points against each other while the rest of the world went on about its business.  Had we gone to war, it would have been hampered by internal bickering and partisanship.  But America wasn't there yet.  We had our differences, but we were still more or less united under a common set of beliefs and identities.

9/11, on the other hand, was what Japan and, to a lesser extent, Germany hoped Pearl Harbor would be.  It would be smacking us in the nose, and hoping that a nation of lazy, divided and decadent party animals would push for peace rather than risk war.  Wrong. Well, wrong in 1941.  Quite right in 2001.  In fact, Islamic terrorism got more than it could have prayed for after the September 11 attacks.  Not only did our nation do what it could to avoid sacrifice for a cause, but the deep partisanship between two visions of America immediately went to work, fighting each other with a zeal that shames the zeal with which we went into WWII.

Early in my blog, I posted a couple posts about this day.  Here, here, and here.  Back then I wondered where our country would go.  Now, years later, I have to say it isn't any closer to regaining what the country had back on that sunny Sunday in Hawaii.

BTW, here is a post I did on which movie you should watch if you want to know about the attack, Japan's struggling to exonerate itself notwithstanding.
Posted by David Griffey at 2:00 PM