Is this a put on? 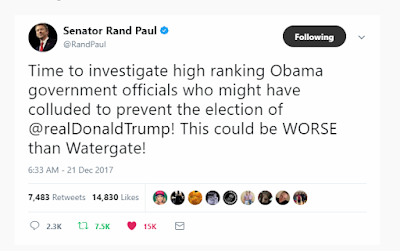 I don't tweet (thank goodness), so I don't know.  So far, the lengthy and celebrated Trump investigations have yielded dozens of non-smoking guns and non-bombshells, but plenty of cases that suggest wrong doing on the part of the DOJ, the Democrats and the FBI, among others.  Not that they are guilty, but it's been tough getting the press, and therefore the American people, behind a push to look into the growing pile of revelations that make the whole process look like a big pile of smelly rubbish.