Are American liberals threatening the peaceful transfer of power 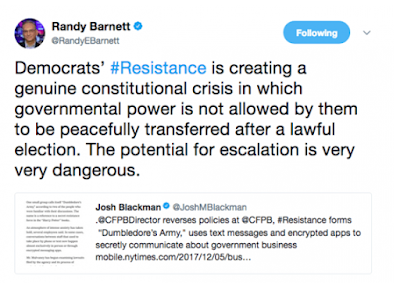 All my life, that was something that America could boast - we created a form of government that has shown the world how to transfer power peacefully.

Yet it's not hard to see that, right now, everything left of center is hellbent on destroying Trump and undoing the results of liberalism's humiliating defeat in 2016.  We've seen open violence, shootings, torture and all manner of physical assaults and property destruction from forces arrayed against Trump and his supporters.

And instead of outcry from the progressive seats of influence and power, we've seen deflection, foot shuffling, excuse making or even support.  Of course a young girl was killed during a clash between leftist radicals and white supremacists, and we saw the entire Confederacy condemned as America's Nazi Germany, and a move - both official and mob rule - to eradicate all public acknowledgement of anyone associated with it.

With Roy Moore, a circus clown conservative stereotype, we've watch the Left effectively convince almost everyone left of center, a fair number of Republicans, and even religious leaders that we no longer need evidence or proof to wreck a person's life.  If we deem them freaks or weirdos, it's enough that someone accuses them of a crime.  Sentencing to commence immediately.  What about teenager girls?  That was yesterday's morality. We have a new set of standards based on the latest convenience. Post-Conservatives approve this message.

And of course on the big legal government side, we've heard an entire year of people insisting Trump must be impeached because we're pretty sure he did something wrong, we know he's really guilty, or hell, we just can't stand him being president.  It's enough that he's Trump and we hate him and all the deplorables that support him.  Take him out, now.  The Left cannot lose.  Just as 2000 and 2004 saw outcries of stolen elections and corrupt voting systems, so we're seeing it all again.  When the Left loses, nothing is acceptable until the Left wins again.

I'm sorry, but from where I sit, the greatest threat to our country and our future is not some wacked out militia types in Montana, or right wing radicals holed up in some office in Houston, or even white racists continuing to spew their repulsive racist bilge.  Though I do fear that the right is producing a branch that says it must become like the Left's worst elements in order to defeat the Left.

No, it's the Left itself, with full control of the press and mass communication and education, training Americans that there is no fundamental truth or morality, but that which aids the cause of the political Left.  If that includes doing away with any peaceful transfer of power that doesn't aid the Left, then so be it.

Email ThisBlogThis!Share to TwitterShare to FacebookShare to Pinterest
Labels: End of Liberty, The Decline and Fall of the American Dream