What does Pope Francis consider a Christian to be? 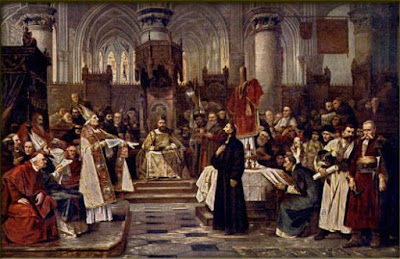 Apparently one who doesn't disagree with him on immigration.  Not that I support Trump's foolish proposals or gut-wrenching rhetoric.  But not a Christian?  Really Pope Francis?  This is what it takes for you to step out and judge someone's Christian identity?  Then how about pro-choice Catholics like Nancy Pelosi?  What about gay marriage advocates and promoters of the sex and drugs culture in the age of 30 million dead from AIDS?  How about someone famous who makes it clear that the Church comes a distant second to our own preferences on social issues, like Martin Sheen?  Are they Christian?

I'm fine if Pope Francis wants to wade into the political ring and start passing out condemnations and accusations about the spiritual state of different politicians.  Have at it.  That's like the good old days of Medieval Europe when excommunications flew around like sparrows.  Don't stop with America either.  There are plenty of options in Europe and Latin America as well.  But if it only comes out due to a single issue, and one that is complex and in fact beyond just the simple 'good or evil, pick one of two options' framework of the current debate, then I have issues.

True, Pope Francis backpedaled a bit and gave the benefit of the doubt over whether Trump said such things.  But it's worth noting again what I've been saying.  The Church leadership, as well as Pope Francis (and to a lesser extent, Pope Benedict) have been slowly pushing the sins of the Left to the side as mere points of disagreement.  Even if they are evil, they are not game changers.  While, on the other hand, increasingly if you don't accept the policy solutions aligned with liberal and secular socialists and Democrats, some talk as if your very salvation can be in jeopardy.  Who beyond me sees a problem there?

Go after Trump all you like.  Nancy Pelosi, too.  John Kerry.  Marco Rubio.  Go on.  Get involved.  But make sure sin is sin, and evil is evil, and if judge the Christian identity of one person, be prepared to do it for all.  Otherwise, consistency will be out the window and we'll have opened up a major case to be made that the agenda is far less Catholic than it is political.  Which, of course, is one of the ongoing criticisms even liberal Evangelicals have of Latin American liberation theologies.  We'll see.
Posted by David Griffey at 12:51 PM

Email ThisBlogThis!Share to TwitterShare to FacebookShare to Pinterest
Labels: Catholic Church and the Left, The Pope