Every now and then The Guardian is worth a read

Usually when it has a scrumptious European recipe in its culinary section.  Otherwise?  I'll stick to supermarket tabloids for a more accurate take on current events.

For instance, right here. Here is the ominous headline:

Heh.  Because the lack of stories about actual violence and destruction proves this warning needs to be published.

And here is my favorite part in the whole darn so called "article":

An early report, dated 27 January, Itac concluded that “a coordinated, complex terrorist attack or planned storming Parliament or other federal locations is unlikely”.

But it concludes that the potential for violence remained very real.

I loved that.  The report concludes a coordinated, complex terrorist attack is unlikely.  But then the Guardian "article" adds that the potential for violence remained very real.

This is more fun than Pippi Longstocking.  Again, the only problem is that people lap this up like a thirsty dog.  Not because they're stupid enough to believe this bilge.  It's because they don't care. As long as their enemies are crushed, any means possible -  true, false or stupid - will do.

UPDATE: Yet it works: 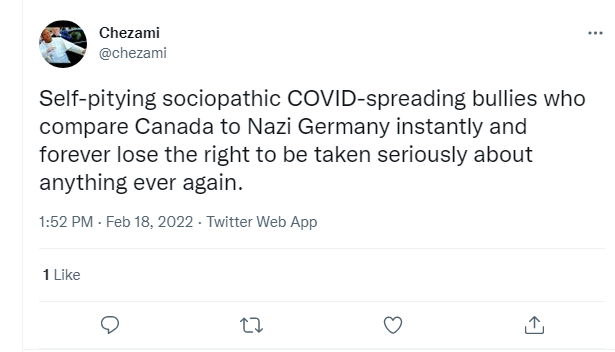 Mark accepts that narrative to give himself a blank check to simply ignore what he doesn't want to deal with.  An old trick to be sure.

As I've said, propaganda works on both the weak and the willing minded.  Often the two being the same.  I know.  It's Mark.  But still, Mark's belief that the Left's enemies must be destroyed is just what this sort of drumbeat propaganda is meant to achieve.  And it isn't just Mark.  If it was, it would be funny.  But throughout history, there are plenty of Marks who will show up to fill the boxcars when the call goes forth that it's time.

Email ThisBlogThis!Share to TwitterShare to FacebookShare to Pinterest
Labels: Humor, The media and the Left but I repeat myself, The Power of Propaganda