One of the best things about being a New Prolife Catholic

Is the joy that comes with the Left's assurance we need only care about human suffering when it doesn't hinder the leftwing narrative.  Any calls for unconditional love or empathy for our neighbors are subordinate to the opportunity to exploit their suffering to validate a particular leftwing agenda.  See how fun it is: 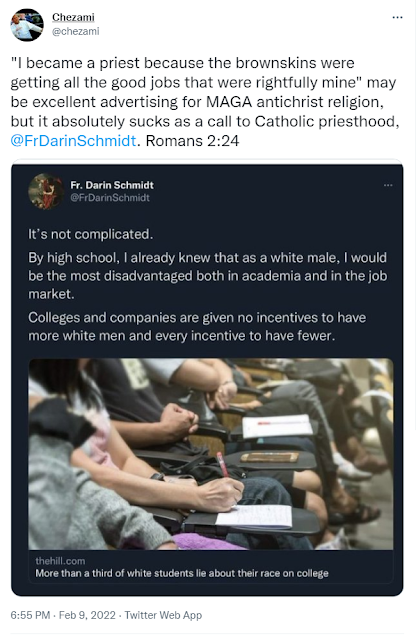 Yep.  The story is old, last year I believe. It was a survey that found unusually high numbers of white college students were lying about their ethnicity.  Odd, if you accept various leftwing talking points like White Privilege, Systemic Racism, and the 1619 Project spin on American history.  After all, if white Americans are wallowing in white privilege, why would so many lie about not being white?

As can be expected, the story itself was swept under the carpet by the Praetorian Press in no time flat.  And that was by those few outlets that bothered to carry it at all.  Nonetheless, the story seems plausible.  When my oldest - a straight A college student - was given a website for scholarships and grants, there were thousands available.  After he entered gender (male) and race (white), however, the options dropped to only a few hundred or so.

Mark happily spews contempt on the possible injustices with the usual false accusation of racism and bigotry as the motivation behind any concern  After all, what's false accusation and character assassination for a New Prolife Catholic? That there could be suffering or unfair treatment of young white Americans doesn't appear to get near Mark's radar.

Why? Because the Left has perfected the call to ignore human suffering and misery, even death, unless it can be exploited to buttress the pertinent leftwing narrative. And if the suffering challenges a leftwing narrative?  Hell.  That's not even worth discussing.

Email ThisBlogThis!Share to TwitterShare to FacebookShare to Pinterest
Labels: The evil the Left does, The New Racism and the Catholic Left