Laura Klassen is an underappreciated gem in the fight for life.  Brash and sassy, she's willing to say what no man could say, and what few people in general are willing to say.  Thank you Christian leadership.

Initially she made a splash with several videos mocking the pro-abortion rights talking points we've come to accept as gospel truth.  \

But she's moved on by making sure time and effort goes to helping expectant mothers and new mothers and their babies.  Of course it's a lie that pro-life advocates don't care about the mom or child after birth.  Are there any stats or research to suggest this is true?  It doesn't matter.  It's something pro-abortion rights activists say as if it's a mantra. 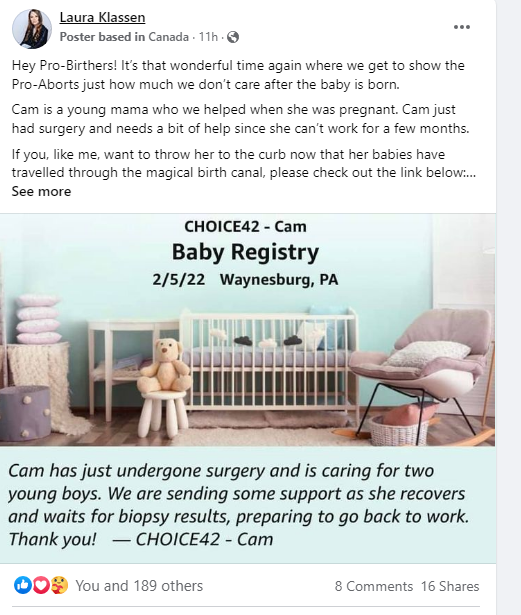 I don't know tech stuff, and can't link to her Facebook page but by this.  I don't  know if it will get you there or not.  But you can get to her FB page and go from there.  Click the links and you'll see a way to help these, and other, babies and moms. It's not just giving money, but purchasing needed items for the individuals in question.   From what I can tell, in this case the only thing needed that hasn't been taken care of is a small freezer.

This isn't being done just to stick it in the eye of abortion rights allies.  After all, most post-orthodox Christians allying with pro-abortion activists thrive on simply ignoring inconvenient people like Ms. Klassen anyway.  I've gone to several New Prolife Catholic sites to see how they address Ms. Klassen's work, and have yet to find a single reference.

This is just about helping if you can.  It's what we should do.  And that's why we do it, as well as fight for life.

Posted by David Griffey at 9:06 AM