In praise of farming

I'm no expert on farming or the various issues that no doubt plague it today.  I grew up in a small, rural farming community in north central Ohio.  We were in the County Seat, which meant many of the county's professionals and leaders were in our town.  In fact, we had one of the highest median household incomes for the state when I was there.  So it was a strange mixture of well-to-do suburbanites surrounded by fields and farmlands.

Of course, it wasn't always pristine.  It was smaller farms than, say, in Iowa or Kansas.  As often as not, they were fields broken by hills and woodlands.  Winding country roads with old, dilapidated houses and rusting farm equipment, sitting year after year, helping to reduce taxes on the annual submissions.  At times, truth be told, it looked downright dirty out there.  Junked up yards, old vehicles.  Every now and then a farm house itself looked good, but only until you drove a little and saw this or that rundown, abandoned building with boards over the windows and doors.  Again, tax shelters agricultural style.

Sometimes, at night, it could be downright scary.  One night when I was little, my Aunt and Grandma were visiting and we were coming home from nearby Marion.  It was pouring rain, and the car got stuck near home.  My Mom got out and went to a nearby farmhouse.  It was old, the wood grayed and the porch 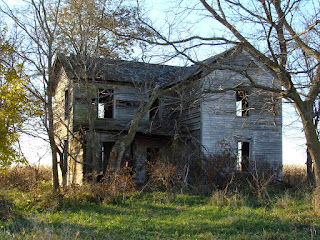 buckled.  She knocked on the door, and an old woman with stringy gray hair answered.  She invited my Mom to use the phone.  Mom went into a room decorated in serious 19th century farm deco, with old dusty furniture and a single lamp lighting the entire downstairs.  A staircase ascended into darkness.  Mature as my Mom was, she got the shivers.  My cousins visited with my sister once, and they stayed the night at a neighboring farmhouse.  The next morning they swore they had stayed in a haunted house.

Still, there was something about it.  Our school area sat in the middle of the older neighborhoods in town, with the high school and its sports fields the farthest north, flanked by houses, woods and a corn field.  Football on Friday nights just doesn't seem the same without looking at the buildings along one side and the field to the north.

And you had the FFA - that's Future Farmers of America to us, a select subgroup of the high school culture, snuff in cheeks and able to take apart a tractor with one arm tied behind their backs.  Those kids had been driving grain trucks before most of us were playing with toy soldiers.

And then there was the harvest time.  The house my Dad rebuilt, when I was about two years old, sat outside town in the inner-skirts of the farming regions.  He had - at the time - 20 acres.  Most of it was woods.  Nearby was a field to the west.  Against the recommendations of nearby farmers, he had a large garden next to that field.  It grew wonderfully.  Corn, beans, tomatoes, cantaloupe (the best anyone ever ate), pumpkins - he even tried watermelon once.  And at harvest time, back then, you still saw cornstalks and haystacks, old scarecrows in fields and sincere pumpkin patches. 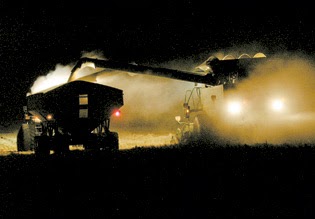 And the creme de la creme of small town living, farmers in the fields at night, harvesting the fruits of their labor.  To this day, there is something about driving home at night and seeing tractors - or more likely today combines - in the fields, depositing  the grains and cobs into a nearby wagon.  The lights illuminate the scene every time in a way that just tugs at something inside, something that makes you think about a life on the land, near nature, bound to the harvests and the seasons.  Even with half million dollar combines with televisions, computers and central air, there's a natural connection.  It evokes.  It reminds me that for all the benefits of technology and industry and the latest smartphone app, we've lost something.  In those lights in the night, I think every time that there is something to be said about a life with nature and nature's God.  Not that no farmers are atheists, but there has to be something that connects you in a way that the tech savvy cosmopolitan could never understand.  Not that I'm ready to do an Oliver Wendell Douglas, but it is something I think on every harvest time when I see those farmers working until the wee hours of the night.
Posted by David Griffey at 1:28 PM