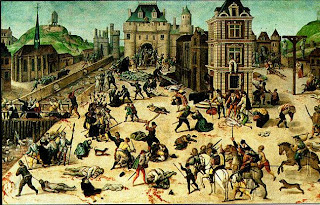 Across the Catholic blogosphere, holy wars are raging.  It's all about Pope Francis.  Is he a radical liberal or subversive revolutionary?  Is he awesome?  Is he trying to right some wrongs in the recent Church governance and reach out to a world no longer bound by Western European sensitivities?  At this point, it's hard to say.

As is typical in the Blogosphere, it can get nasty.  Name calling, copious doses of Raca and Fool, insults, self righteousness.  And entering into the battlefield comes Mr. Douthat with his customary level headedness.  His take?  What the Pope is trying to do is understandable. He's trying to reach out to the masses in a way that circumnavigates some of the obstacles that, rightly or wrongly, the Church is blamed for erecting.  He sees Francis as trying to break the trend of the modern Faith, where one is stuck either holding firm against the winds of change, or just tossing the Faith out the window and embracing the latest, hippest.  The third group, those in the middle who gradually lose their zeal and desire to care, are also targets - perhaps the targets.

In fact, Douthat names the challenge.  Pope Francis is trying what has failed in every major Western faith that has attempted it: that is to find that happy middle between post-Christian revolution and traditional orthodoxy.  It's true.  And those Catholics who are hailing Francis for putting aside the Culture Wars, are sometimes the same who have mocked Evangelical leaders who have done it in the past.  After all, Francis isn't the first leader in recent years to make that statement, that we have to move beyond the Gay, Abortion, Culture issues and get to the Heart of Jesus.  It's just that in those churches where the strategy has been attempted, many have concluded something was lost.  Whether the infamous 'Seeker Sensitive Churches', or Rick Warren, or Joel Osteen - let's face it, most Catholics don't look to those as stellar examples of firm doctrinal moorings.

And yet that is precisely what Francis is trying to do.  In many ways, he is being the "Seeker Sensitive Pope".  He's trying to figure out what people don't like about the Church, and overcome it.  He's trying to reach that vast middle ground and grow it.  My prayers are that he becomes the first leader of a Biblical Faith to succeed where so many others have failed.  Where the Church has failed.

Douthat reminds us that the more traditional Catholics are not just blowing air out their butts when they express concern.  It wasn't too long ago that many extremes in the Church, in light of Vatican II, had pushed it to becoming a mockery that everyone used to dismiss the Church in the modern world, including not a few Catholics:


[Conservative Catholics'] anxiety is not that the new pope is about to radically change church teaching, since part of being a conservative Catholic is believing that such a change can’t happen. Rather, they fear that the center he’s trying to seize will crumble beneath him, because the chasm between the culture and orthodox faith is simply too immense.

And they worry as well that we have seen something like his strategy attempted before, when the church’s 1970s-era emphasis on social justice, liturgical improvisation and casual-cool style had disappointing results: not a rich engagement with modern culture but a surrender to that culture’s “Me Decade” manifestations — producing tacky liturgy, ugly churches, Jonathan Livingston Seagull theology and ultimately empty pews.

That's about the best take I've seen.  That and Charlotte Allen's that I linked tot he other day.  What the Pope is trying to do is fine.  Whether he succeeds, or creates a problem that has sucked many another Western Faith into the drains remains to be seen.
Posted by David Griffey at 10:12 AM