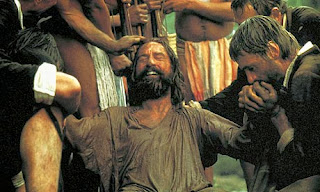 We've had a bit of Jeremy fill in recent weeks.  With The Hollow Crown series, and the other night, with the movie The Mission.  One of the great films, it should be mandatory watching for Catholics.  True, it is hardly a sympathetic portrayal of the Church.  Like all Hollywood adaptations, it's purpose is to preach.  Still, it does so beautifully.  And it takes a real moment in Church history, oft forgotten, when the Church sometimes zigged rather than zagged.

Most people are stuck around the Crusades or the Inquisition.  But truth be told, the Church's real problems have historically been during great, tumultuous changes in the contemporary context in which it finds itself.  Whether the sudden recognition by Constantine, and the power and influence it brought; or the rise of  Medieval Feudal society and its linking to wealth and land and power; or the post-Reformation years that found the Church assailed on every side by forces seeking to strip it of its powers, the Church has not always reacted in the best ways.

As we face perhaps the greatest threat to orthodoxy since the Arian controversy, and simultaneously face the greatest threat to the Church's authority and ability to convey Truth authoritatively since the Reformation, it will be something to watch.  Nobody here will be around to see the final results.  Right now, it's enough to know that the Church again finds itself in the crossroads of historic change.  It's at those times that the Church historically staked claims on principles and ideals that ended up going in directions no Apostle could ever have dreamed of, and few Catholics today recount with pride and joy.  Watch The Mission.  A clash of state, church and money.  And remember it's not the first or last time the Church will be in the crosshairs of history.
Posted by David Griffey at 8:04 PM

Email ThisBlogThis!Share to TwitterShare to FacebookShare to Pinterest
Labels: Movies