The media is victorious

Once again, in a clash between two parties unwilling to compromise, the media has been able to cast blame on one party alone, and it appears the public has accepted that version.  The GOP is to blame, according to an NBC/WSJ poll.  It reminds me of the same clash that came in the 90s between the GOP and Bill Clinton.  Today, media pundits admit it was an unwillingness to compromise between both Gingrich's GOP and the Clinton White House.  Then, it was entirely the fault of Ebenezer Newt and the Christmas stealing Republicans: 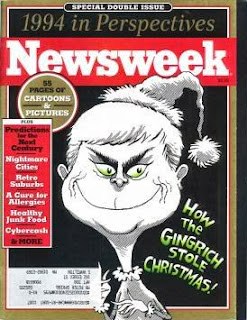 I don't blame the press.  After all, if something works, why change?  Through selective narrative, distorting facts, and spinning stories, they've successfully convinced Americans that the definition of compromise is getting with the program and embracing the Liberal Revolution.   In the near future, expect America to be left with one political party divided by different spellings.
Posted by David Griffey at 6:30 PM

Email ThisBlogThis!Share to TwitterShare to FacebookShare to Pinterest
Labels: The Power of Propaganda