In praise of rabbit hunting 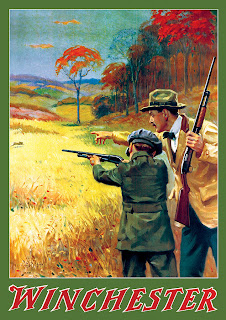 My Dad was a hunter.  He got it from his Dad and brothers.  Growing up in the depression, hunting was no mere sport.  It literally meant food on the table or no food on the table.  As my Dad said, when his own father and oldest brother went hunting, if they took five shells, they came back with five animals.  There was no sport about it.

Nonetheless, as their fortunes improved along with America's, my Dad still found time to go out and hunt.  Now Dad was one of those 10% who much preferred a cold, icy winter day to basking alongside the beach in the blistering summer.  So hunting appealed to his fondness for the season.  I can't help but think it also brought back memories, maybe not for memories of things he did - I never heard him tell of hunting with his own Dad.  But memories of when he was young, when no matter how rough the life, there is that notion of innocence still worth grasping.

When I was little, and we lived in a small house in the country - a house that Dad virtually rebuilt by hand - I remember him out hunting, when my Aunt Dorthy would tell me that was my Dad whenever we heard the distance echoes of a shotgun.  When I was old enough, Dad took me hunting.  Perhaps it's my nature, but I didn't care for it, not one bit.  I just didn't like shooting and killing little furry animals.  I understood the whole keeping the animals in check arguments   And Dad was sporting - he always gave an animal a chance.  He wouldn't shoot something just sitting there.  He gave it a running chance.  Plus, he made sure the animals were taken back home to be fixed (a gamy meal to be sure), or gave it to whoever owned the property on which we ventured.

Despite my distaste for hurting things, ironically I was rather a good shot.  In a sort of Sundance Kid sort of way, I couldn't hit the side of the barn if it was standing there.  But if I suddenly reacted to something, I hit far more than I missed, and usually with precision.  I always thought it ironic that I was good at doing something I couldn't stand.  Sort of like public speaking.  I'm told I'm not altogether bad at it, in fact many say I'm rather good.  By my introverted ways make me dread and loathe getting up in front of groups of people.  Figures I would be good at only those things I find no pleasure in pursuing!

Anyway, back to the hunting.  So I grew up going hunting with my Dad.  We usually focused on rabbit hunting, as that was Dad's specialty. Deer hunting was too full of city slickers who knew nothing of guns or hunting safety.  And squirrels   Have you ever eaten squirrel?   So we focused on hunting rabbit, which involved trekking through endless miles of woodlands, kicking through brush and undergrowth, trying to scare up any rabbit that might be hunkered down at our approach.

We were usually Thanksgiving to December hunters, with the later weeks in January going by the wayside.  I wonder if Dad hunted because of the seasonal feel of it all.  I know for me, even if I wasn't a fan of shooting things,  I can't help but associate hunting with the smell of turkey, or the ring of Christmas bells in the not-too-distant future.  I can still remember the hot chocolate, the coffee for Dad, trudging through the snow cloaked woods with Slim Jims that we would pack in plenty.

Eventually, as all things do, our hunting days came to an end.  When I moved to Florida, I made no effort to renew my hunting license.  In Ohio, Dad kept my Ohio license renewed.  Finally, when I moved back to Kentucky to go to seminary, I went up to visit over Christmas time.  For old time's sake, we went hunting.  All day we found nothing at all.  Maybe we did and I just tried to avoid shooting it (I'd do that sometimes).  Then on our way home, just minutes from the car, a rabbit darted out from some bushes.  Without a second's hesitation, up went the guns.  Dad hit it before I had a chance to do more than react.  Down it went.  As we went over, Dad expressed his regret, almost as if he, too, was hoping we'd get on without hitting something.  We field dressed it and brought it home.  But it was the last time we would ever go hunting together again. 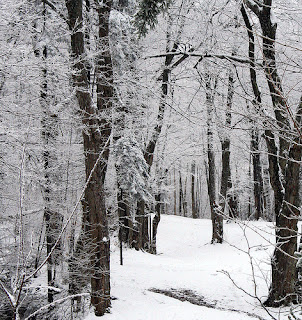 And now that Dad's gone, I can't help but say I miss hunting.  I miss going out into the world and enjoying the fresh outdoors. I remember one particular day, we were hunting just off the railroad tracks in Galion.  We often went along the railroad tracks, Dad playing some employee card to justify hunting on railroad property.  We veered off into some woods that were owned by a farmer he talked to ahead of time   The woods were light, mostly smaller trees and some light brush.  It was late November, I think the weekend of Thanksgiving.  There was already a covering of snow (for we didn't  hunt without snow for tracking).  Dad was ahead, plowing through the brush, while I was supposed to be on the lookout for our quarry that might try to circle back.

I eventually came to a stop.  As I stood there waiting, it began to snow.  It was one of those slow, downy snows that Frost wrote about.  It was already late in the day, and the last place we would hunt.  I just stood there, looking.  The snow muffled the sound, even the slight crunching of branches as Dad made his way around.  The sky was winter grey, and there was no breeze.  Just snowflakes floating down.  I stood there then, just taking it all in.  At least until Dad roused me with a reminder that I was supposed to be helping.

It's as if it were yesterday.  And it was quite refreshing.  Even now, all those decades later, just remembering it is refreshing.  Perhaps it's an American thing, but it's difficult to think of actually just going out into the woods unless I'm doing something.  Fishing.  Hiking.  Camping.  Something.  And since those aren't popular in the wintertime, getting out into nature seems to take a backseat to indoor activities once the weather chills.  But by doing something like hunting, there is almost an excuse, a reason to be out and about.  A call to do more than just step out for five minutes then duck back in as soon as the elements begin to take their toll.  There's something that presses you to be out past comfort, until when limbs are cold and digits frozen, you make it past that point of caring.  Like running a race, when you make it past the first moments of pain and hurting, you reach that numbness that allows you to step back, stop worrying, and enjoy the world that God made, instead of relying on the machinery made by man to interpret it for you.

So I must admit, I miss that reason to get out on a cold winter day.  I thought of that as I scrambled about today, cleaning the deck after squirrels blackened it with a feast of walnuts.  There I was, the frozen flakes beginning to fall, the wind picking up, thinking how foolish I was to be out on a day like today.  But after the first moments of being cold, I had to admit I was somewhat enjoying it.  Just like I did all those years ago.  So here's to you Dad, it turns out I enjoyed it more than I thought back then, and would love one more time to do it all again - even if I had to pay attention and actually try to shoot my targets.
Posted by David Griffey at 4:27 PM